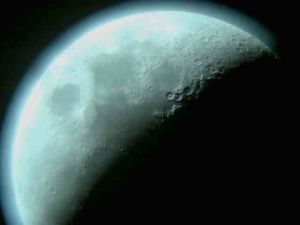 We end the year with a Blue Moon, a second Full Moon in a single calendar month; fun, colorfully describes a rarity, but doesn’t mean a lot astrologically, as calendars aren’t strict reflections of the Cosmos, but man-made measuring conveniences. Now that I’ve stomped all the fun out of this concept, I’ll just keep going: New Year’s Eve is also arbitrary–shouldn’t it fall at the last degree of Pisces (if you’re an astrologer) or on the last day of winter (if you’re a Wicca or Druid or anyone who loves and feels the Earth) or last day of summer (whichever way your summer goes, depending on hemisphere, if you live in a really hot place–there’s a reason both Arab and Indian astrologers named a too-close to the Sun placement severely weakened)?

But, if you’re like me, you may like to believe that there’s a reason the Collective has chosen this day to designate the end of our trip around the Sun. I like to believe that our mass agreement invests some days with a wee bit of magic, and this is one of them. Plus the use of the word ‘eve’ to describe the day before something else-it holds a sense of anticipation, of something’s coming get ready: Christmas Eve, New Year’s Eve, All Hallow’s Eve, Eve of Destruction–you see what I mean.

So, I approach this Blue Moon, New Year’s Eve Eclipse like a hopeful robin looking for a worm on the astroturf–it all may be artificial, but there’s got to be something good here, too! Such a pile-up of man-designated ‘events’ with one indisputably not (the eclipse) puts me in a mood to go looking for the magic–here’s what I see, for the eclipse at 10 Cancer 14 December 31st at 11:12 AM PST:

The Full Moon is in Cancer, conjunct (of course) the Earth, and when we see that our strict two degree aspect rule for eclipses gets us nothing, we realize just how soft and nurturing the reflected light of Moon in Cancer can be. It will bathe us in a glow, and the larger aspects it makes (a generous 3.5 degree max) are soft and diffuse, too, not bringing the usual clarity and psychic punch that an eclipse holds, but instead riding in on the atmosphere like a mist (or fumes, or poison gas!)  Cancer holding a meeting of the Moon and the Earth, and the power of the alignment (even though it’s partial from our viewpoint) suggests that emotional and intuitive matters will ‘announce’ themselves through material and physical circumstances, and all will be in the Cancer mode: caring and caretaking, concerned, sensitive, especially to the moods and motives of others, and not entirely from a caring point, but from a selfish one, as well, as Cancer is always prone to feel emotionally vulnerable, with the worry that they will be abandoned in some form, or not cared for, behind much of their own offers of care (“I’ll love you and care for you now, and you’ll return the feeling and favor, won’t you?’ It’s interesting that Cancer takes an active, Cardinal approach to getting what it wants–but with the Cardinals we must remember that a sense of proportion and balance comes into play–and with Cancer, the energy wants back what it gave out–in a Cancer approach to things, that’s only right). Cancer may assume obligation to care back by anybody or thing they nurture or love–and that can be the fly in the ointment for the immature (and by that I mean entity who has not grown into the full meaning of the sign) Cancer energy. So we’ll all be swimming in a soft murk of Cancer energy–we just needed to know the possible pitfalls (as the positives about genuine care and support are obvious).

Even with liberal orbs, we get very little, but it does serve to tell us what will be lurking in that nursing, nurturing, I-care-so-much-it-hurts Cancer vibe. We have a trine from the Moon/ Earth to Pallas=wisdom and skills are in harmony with the eclipse energy–but this is a reflective, Moon energy, and we would be smart to ask a few questions (and Pallas gives us the ability–it’s up to us to do so wisely): I feel it, it seems smart, but is that light coming from you or me? Am I accepting your assertion as intelligent, as my own, when maybe it’s neither? Do I have the skills and acumen to undertake or understand what’s before me? Am I using my own inner wisdom in assessing the situation before me?

The Moon/ Earth combo is also square Zeus=the asteroid Zeus is one I’ve been studying intently of late, and what it represents, in general terms, is a fitting counterpoint to the female Juno, a largely male designator (though it has meaning for a woman, as well) keyed to ambition, power, authority and the temptation to abuse it, and wilfullness (see my upcoming in-depth analysis of Zeus in the first issue of my magazine, due in January!) This aspect suggests to me that we may divide up, ever so casually, into those who are receptive (for the Moon’s light has been received–and for some, this may come with the role of victim) and those who would wield the power and control (and for some this could be as abusers, in some sense). The aspect sets up a dynamic of those who care (or who pretend to) in conflict with those who, under the guise of partnership or fairness (Zeus in Libra) will try to take the reins for themselves. This won’t necessarily be nasty; it’s simply a recognition of the motivations of each, and the way that they’re bound to conflict (square).

And the Sun in the eclipse receives a conjunction from Venus, both in Capricorn. Venus kisses the Sun, but it’s likely to be a dry, papery kiss with business on its mind, or maybe with the goal of building or solidifying something (like a relationship). The real Venus moment comes with the exact conjunction of Venus to the Sun and Moon at the Solar Eclipse to follow two weeks later–until then, romance (in the largest sense) may have to take a back seat to other, likely power related, concerns.

Did we find the magic? Not exactly-but if we tap the genuine, Moon related, Cancer oriented bits within ourselves (especially in terms of the natal House where the Moon/ Earth meeting occurs) we can work a little magic in the soft light of the eclipse all on our own.