The Lunar eclipse in Aquarius is just a couple hours off, but I feel as if we’ve been under the distorted light of an eclipse for weeks now. We’ve hit the record for days without rain–51–and are slated to break it, adding at least another seven days of hot, dry weather in the coming week. That’s made it hellish, but what gives the light the dull, reddish shadows even in midday are the wildfires in Canada; the mild flow from North to South that normally cools us in summer is carrying a dense carmine haze that permeates the air from horizon to zenith. Outside it looks and feels like those fleeting moments when the Earth casts its shadow (Lunar eclipse) or when the Moon comes between Earth and Sun, blocking out the Solar orb (Solar eclipse)–and it just seems so unnatural, as if we are living a slow-mo version of a transformative, seminal moment, over days and days. 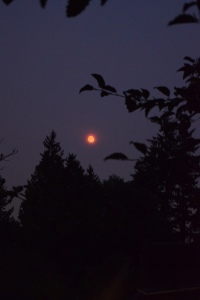 Though I know some people are seeing the August eclipses as the Four Horsemen of the Apocalypse, I’m seeing them more as breakwaters, those walls onto which the fiercest waves crash; breakwaters protect the shore from being decimated by the sheer energy of the waves, and these celestial events are meant to disrupt the pattern, to reveal, to free–that last most of all–and to both concentrate (showing us meaning) and dissipate (softening the blow) the impact that can come from a sharp, seemingly sudden energy shift. Take the eclipse events as a breakwater would: let them wash over you, let them reveal what’s generated that wave energy, but don’t allow them to force a precipitous response, or to give you the impression that you’ll never get out from under what it brings.

On a lighter note, I didn’t even know I had a bucket list, until Saturday night; that’s when I realized my Aquarian Ascendant had waited 35 years to hear Fred Schneider intone in person: “I’ve got me a car, and it’s as big as a whale, and it’s about to SET SAIL!” Oh, the little gifts eclipse season brings are really the best. Have a great one! And special thanks to all the lovely people who’ve written some really nice things to and about me lately–those words have been more appreciated than you know.