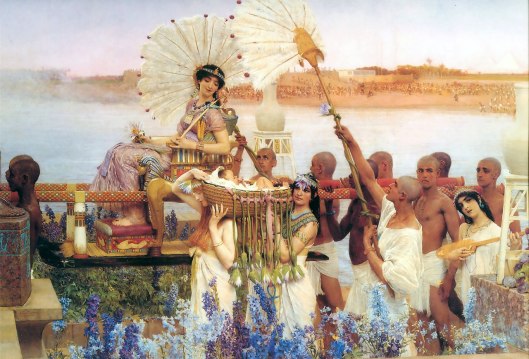 Not an object, but good that he was found! ‘The Finding of Moses’ By Lawrence Alma-Tadema 1904 {{PD}}

Please see yesterday’s post for the initial part of the article. Today is also bare of perfecting aspects, with only a semi-square from the Sun to Saturn suggesting we may be keenly aware of obstacles and rules–try to see that they seem larger than they are, and that’s because our attention is naturally drawn to them right now–and that can make problems appear much bigger than they are.

Our example in the article was drawn with Placidus Houses, but the rules apply to any House system–I only note it because of a mention of intercepted signs, which don’t happen in Whole Sign, which I use now.

We need to note some particular conditions applicable to finding lost items:

·         If we are asking about something ourselves, we are designated by the 1st House, but if we are asking for someone else, we will cast the chart, then ‘turn’ it so that the House that represents that individual from our point of view becomes the 1st. For instance, if we ask about a lost item for our daughter (“Where is my daughter’s passport?”) the 5th House, representing our child, becomes the 1st, and so the significator of the lost item is found in the original 6th, which is the 2nd from the 5th. If, however, we ask and refer to our daughter by name (“Where is Hildegarde’s passport?”) we would designate her as the 7th in the original chart, and so the 8th becomes the house indicating the lost item. This is part of why in all Horary the framing of the question is of such importance. As an astrologer, one frames the question and reads the chart from the question-asker’s point of view. Example: If the person asking the question is named Chloe, the astrologer asks, ‘Where are my (Chloe’s) keys?’ and places Chloe in the 1st House.

·         The first place to look for an object is indicated by the House where the significator of the object is found (so, if the ruler of the 2nd is Mars and it is posited in the 3rd, we would look in those areas represented by the 3rd: a sibling or neighbor may have taken it or know where it is, or it may be in their home, it may be in the garage or in the car, at a store or market, in or on a desk or other place where writing occurs or written materials are kept, in the TV or media room or on one of these appliances, in a hallway, stairway, or other passage, including out in the road or driveway, at a local school or park, or left on a bus or taxi) ; the sign of the significator, as well as its dispositor (ruler) can also give clues, as can the House where the dispositor is found. The House of any indicator often names the physical place (on a shelf, at the dump, in bed) while the sign describes the conditions (Scorpio= wet, marshy, low lying areas, humid places, near plumbing; Aquarius=uneven terrain, dry, literally in the air or hanging somewhere, where it’s breezy–near a window, for instance)–this isn’t a hard and fast separation, though, and lots of variation occurs (the sign pointing to location, for instance, rather than atmosphere). There are lots of possibilities for a significator–part of our job in reading the chart is to think logically about the object, and try to build a picture or three of where it might be from those many possibilities.

·         Directions can be judged from the actual directions in a chart: ASC is due east, MC north, and so on, for charts drawn in the Northern Hemisphere. For the Southern Hemisphere, please see the link in the comments.

·         The signs are of course associated with colors, the most famous probably being Aries’ Martian red. Sometimes colors can help with location, but as with direction, it may not be particularly helpful or necessary in finding a lost object.

·         The Part of Fortune can be useful for locating lost objects. Its location can be read just as are those of the significators and their dispositors, though I find that it will give the most useful information when it is in the same number degree, regardless of sign, as one of the significators. Use the Part of the original chart, even if you turn it to accommodate someone else’s viewpoint.

·         A retrograde planet as significator of the item suggests it will be found or return.

·         If the significator of the lost object is in Virgo, Pisces, the 6th or 12th, or is conjunct Pluto or Neptune, the item is probably tucked out of sight, is hidden, obscured somehow, must be dug for or ‘revealed’, in some way, and sometimes may not be findable.

I decided to use a chart I’d just drawn for a real-life problem: I asked, “Where is my book?” The book I was looking for is the exceptionally useful Horary volume in the March and McEvers’ ‘The Only Way to . . .’ series. I’ve learned a great deal from other volumes on Horary, but theirs is the cleanest and most direct methodology, and never fails me. Though I know what I’m doing in terms of reading the chart, with lost items it helps to have a comprehensive list of possibilities for what a planet, sign, or House might represent, and these are included in their volume and I use those lists as references frequently–the last thing I wanted to do was overlook something useful in explaining things to you, and now the book I needed was nowhere to be found!

The chart is drawn for 27 November 2012 at 10:47 AM PST Seattle, Washington USA. The Ascendant is 18 Capricorn 27, and certainly reflects my serious attitude! Also accurate are the intercepted sign in the 1st (Aquarius, my natal ASC) and the placement of Neptune and Chiron therein, with Neptune signifying my distress and confusion at having looked for two days and not finding it, and Chiron in Pisces probably relating to the fact that I’m trying here to relay my unique skills (Chiron) to you! That Ascendant is safe to judge (though my significator does fall in the ‘fiery way’, perhaps reiterating my stress), the 7th is clear, but uh-oh! The Moon is Void, at 26 Taurus 57, though it is less than 1 degree past conjunction with the South Node. Now this is where the personal discretion of the astrologer comes in: the Nodes are not bodies but points where the Moon’s path crosses the ecliptic–the Nodes identify the most extreme points on this path at any one time–so does this count as the Moon being Void, and so should we abandon the chart right now as unreadable? Not every astrologer uses the Nodes in Horary, and though I do note that they often appear in a House significant to the question, and point in the inevitable direction that the question will evolve (the North Node) I still don’t consistently pay attention to them in Horary–but sometimes they become prominent, as here.

When I hit something so iffy that I end up not being sure what to do, I usually proceed, with the idea that if anything else is unclear then it’s over, but also open to the chart being legitimate if everything else tells a coherent story. Ruler of the 2nd, significator for the ‘lost object’ of the book, is Neptune, which sits in the 1st. This suggests I either know where it is or I’m the one who put it where I can’t find it–certainly descriptive of the situation and common to my difficulties! In its own sign of Pisces, the significator suggests the book is hidden or obscured from view, and as a location the 1st suggests that the book is in the area where I spend the most time–that makes sense–but where to now? The significator is its own dispositor, and the entire house is where I spend my time! We might now inspect the Moon, though it mostly says that it may be in a place I’ve stashed it before (Moon conjunct the South Node). The 2nd itself hold Pallas in Pisces (describing the esoteric wisdom contained in the book) and Uranus in Aries (suggesting perhaps that I need to aggressively continue looking, and that it might be found suddenly), and in Aries we might find a hint as to the location or circumstances under which it will be found: discarding the outside possibilities, we have somewhere near a heating source, somewhere not frequented often, possibly near the ceiling (because heat rises?) in or near something metal.

So, we go to another possibility, inspecting the ruler of a House where the object would naturally be found, in this case, a book would fall in the 3rd of written materials (yes, it’s been published, but the 9th would be more appropriate for Jupiterian items, like a horse or TV). Aries is on the cusp, with ruler Mars in the 12th conjunct Pluto with only 1 minute difference–the location says hidden, the sign (Capricorn) says in something solid, a box, perhaps, maybe black or dark brown, behind closed doors, something wooden, or made of cement or rock, contained, or maybe under a pile of other things, but put there with the idea of staying organized that is inherent to Cappy. Pluto hints that it might have been re-cycled (yikes!) or destroyed–but close as Pluto is to Mars, it’s not necessarily a player. Pluto does rule the 10th, implying that where it’s been put might have to do with my career, someplace I store professional papers–okay, but I thought I’d already looked in all those places?

Let’s review the clues: the book is hidden or obscured from view, placed somewhere I’ve put it before and where I spend a lot of time, probably in pursuing my career, in something solid, near metal or a brown or black Capricorn material (wood!) behind a door of some kind, placed there trying to stay organized–and then it hits me! This describes the seldom-used, re-finished to show its natural brown wood, drop-down desk that holds astrology papers and books, most of which I seldom access or need–unlike the book I’m looking for. I had looked in the drawers of this desk, and even opened the drop-down door, but somehow missed the book which, Eureka! I find tucked under some papers in one of the desk’s cubbies–oh, and there’s a large copper planter on top of the desk, and the hardware is black metal. This desk is located right next to the desk where my computer sits–it is the corner of the house I frequent the most, no question–however, the location doesn’t correspond to directional indicators–unless I imagine myself literally standing in the place of the ASC, facing in to the chart, as I’m sitting at my computer desk–then the book would lie physically to my left, where we find Mars in the 12th.

Horary can be extremely complicated, and it does take a long time to become comfortable making discretionary judgments about which clues to follow, but it’s a rewarding branch of astrology that can deliver some amazing and highly practical results. Good luck with your explorations!

Here’s another example I tackled on the blog, and see here if you’d like a Horary done for you–thanks!