We’re at that liminal, Dark of the Moon point, just before both the New Moon in Leo and the station direct of Mercury. That means a lot of tension with nowhere to go, a lot of feeling around in the dark, trying to get our bearings, a lot of effort made that won’t quite meet the mark–and that’s okay, really, because at this time we’re likely gaining access to areas of the unconscious that are usually well-hidden by the conscious mind. Wisdom can seep into the mind at this point without our being aware of it, a kind of subtle intake that will only make itself known later. The trick today is to avoid acting on delusion, misinformation, or in misunderstanding of our own values (Yes, this can happen, if one is telling oneself one’s values are other than what they truly are). We learn by absorbing, and especially valuable to us at this time are the lessons we can glean from power entities, those in authority; we can gain knowledge simply by observing their interaction with what they consider their domain. Though seemingly a passive point, there’s a lot going on here below the surface–so relax, and know that no striving is required in order to get things together effectively. 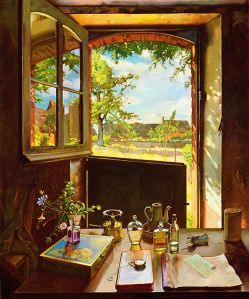 The table’s all set for a Happy Birthday. ‘Open Door on a Garden’ By Konstantin Somov 1934 {{PD}}

For those born with the Sun at 07 Leo. Check your natal chart for the correct Sun degree (you may want to read both the degree number and the one that follows, if you have minutes on your Sun position–together these offer a more complete picture of your year ahead). Well you’re a firecracker, aren’t you, dear Leo? What scene did you just recently blow up, what riot start, what chaos unleash, that you may have to spend the solar year, through to your next birthday, atoning for? Oh, maybe it’s not that harsh, maybe it’s only that you’re being asked to re-construct, resurrect, transform, or tear down to the ground something that’s always been there–and you may wonder why, and why you are the one being asked. Let’s just say it’s because you’re the one that has the correct status, who holds the position that can make it all happen–and you have the energy, and yes, ego, to take it on successfully. A lesser Being couldn’t even approach making this change. The only question you need answer is, Who do I need to surround myself with in order to make the most of that post-change world? Good luck!

Today’s word image is another dream symbol, a sabre-toothed tiger. An extinct predator, prehistoric–so we might ask ourselves: What previous danger (one we still see as impacting us) is actually long gone? And doesn’t that suggest it’s time to let that go as a part of the psyche, or even as an excuse for particular responses and views?