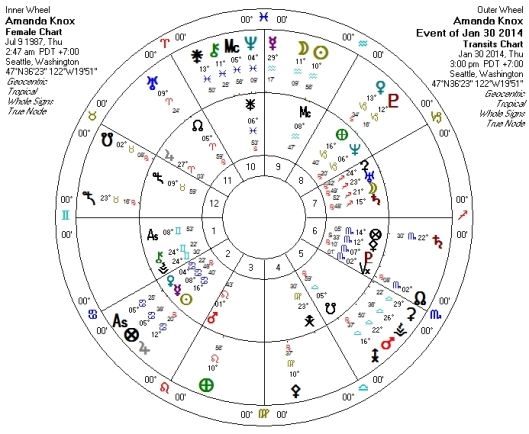 I did say I would look a little more at the case of Amanda Knox, who yesterday had her murder conviction upheld by an Italian court. The transits are set for 3 PM local time (Seattle), which is approximately when word came down that a decision had been rendered. To my understanding Knox gets an automatic appeal of this decision; only if she loses on the subsequent appeal would extradition be on the table.

On examining the natal chart and transits, we see a few striking things, the most telling of which to my mind is the conjunction of the transiting North Node to the natal Vertex, with only an 8 minute gap. That implies this entire process is unquestionably her fate, no matter what the final outcome; think of it as playing a role–we all have these scenarios–this is hers.

There’s a Water Grand Trine formed by t Jupiter, t Juno-Chiron, and Amanda’s natal Pallas. We see a broadcasting of hurt and its effect on empowerment, freedom (Jupiter) threatened–certainly one loses both freedom and empowerment when imprisoned–but the contact to Knox’s natal Pallas implies she knows the wisdom of what’s happening, or perhaps of this particular ruling. This may be nothing more than her recognition of that role indicated by the NN-Vertex contact, or it could be the expected result, from her point of view–or it could even be the unstated recognition of the appropriateness of the ruling, should she in fact be guilty. In any case, this is playing out on an emotional plane (the Water element)

The New Moon occurred in Amanda’s 9th; not surprising that a ruling in a foreign country opens a whole new chapter for her. t Zeus creates a T-square with the Sun-Earth axis=we’re seeing the results, material and spiritual, of the desire nature acting out–but does this say she’s guilty, and that the ruling is the result of her own choices, or that the desires of the Italian prosecution are bringing conflict to her Soul and Material Purposes? It could be either.

We also see a Mixed Element Grand Trine of t Ceres and Mercury, both at 29 degrees of their respective signs, in aspect to Amanda’s Chiron-Vesta conjunction in the 1st, and out-of-element to her natal Venus in the 2nd–in fact, the midpoint of her placements is the 29 degree point that fills in the Trine perfectly. ‘A stressful message from authorities, who are themselves under stress’ certainly describes the transiting energies; this impacts Knox’s sense of herself as a woman, her Self-worth picture, her relationships, and her finances, as well as a sense of herself as wounded that she may consider sacred (Chiron-Vesta). But, a GT carries an implication of energy balance, and this could suggest that the situation allows Knox to express those affected natal characteristics effectively and perhaps Self-righteously, as well. After all, the most effective defense against a charge of murder (the attitude that makes you most believable in your denial of responsibility) may be your own view of yourself as a victim whose status as such is sacred, not to be questioned.

t Mercury at 29 tense degrees of Aquarius also quincunxes natal Mars in Leo; Amanda’s ego may be frustrated by what’s being communicated–when the court’s speaking, she’s not in control of the message. t Neptune is within orb of her n Juno in the 10th, and t Mars is also sesquiquadrate=she may feel she’s under attack, and be confused about her reputation, about the impression she makes, about what may actually be empowering to her and what isn’t, and perhaps she may be prone at this time (while Neptune lingers) to partner with others who may raise her status but not truly serve her cause (a la Juno).

t Neptune also fills in a Grand Trine with Amanda’s natal Venus and Pluto=illusion, Truth, and beauty are evenly matched at this point. Since this Pluto and Venus both belong to Knox natally, it seems it will be the function of Neptune, strong in its own sign, to sort it out. Truth (and maybe rage) express through her values, her relationships to people and money, and her idea of herself as a woman, but Neptune’s presence may exaggerate the ‘mirror’ quality Knox has anyway, and make current opinions reflective of what each of us thinks we see. It also could imply that, until Neptune moves on, we may have no chance at getting to the truth.

t Sedna is apex to a Finger of God with base of n Ceres-Uranus-Moon in 7th (drawing a picture of someone who may believe that all the authority, privilege to act as one pleases, and emotional sensitivity belongs to others) sextile t Mars. The Finger takes that natal complex, combines it with aggression both given and received, and concludes that this will create both a primal result (speaking to the deepest held urges and qualities) and that these factors may obscure who’s really attacking whom.

My sense is that Knox is at a crucial point: she has many energies working in her favor right now, especially ones related to being able to create, if not precisely the image she wants to, then one that obscures the reality picture. This won’t last forever; the cover of Neptune and the ‘blind spot’ of Sedna will move on, and she will appear differently to onlookers–the question is, what will they see when the influences change?