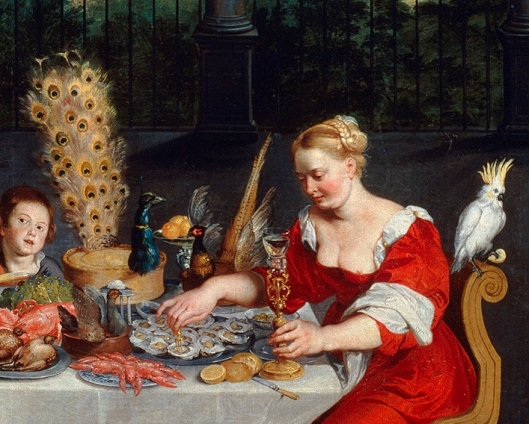 Somehow I can’t imagine Juno would approve of this: a peacock served in full plumage, detail from Brueghel’s ‘The Senses of Taste, Hearing, and Touch’ 1618 {{PD-Art}}

Or maybe that’s ‘Let me tell you what to eat!’ Ceres doesn’t give up her sense of authority and dominion just because the material comforts and conditions are emphasized; instead, she feels them more. Her role as Mother Nature is key to her reactions and identity as she transits the sign of the bull. She translates her command of nature into a command of those over whom she feels she holds authority, and the result can be an unreasonable push by some to control the intake, output, and asset-level of others. You’ll recall that Ceres took her maternal oversight very seriously, literally negotiating daughter Proserpina/ Persephone’s position in the Underworld–and that means she won’t hesitate to overstep personal boundaries to try to control the situation.

There’s an advantage to her relationship with nature, though, that brings forward an enjoyment of the material during her transit of Taurus: the comforts and pleasures of physical existence are brighter, stronger, tastier, more pungent, fragrant, stimulating, and as a consequence of the world feeling so real and in your face we may feel alive in a way we haven’t for some time. This coincides with a relatively warm spring in the Northern Hemisphere, which may exaggerate the effect for those who are able to get out and about in the sunshine.

It’s time to plant (don’t be too tied to the Moon phases–they seem to affect growth rates more than anything else, though I would avoid planting or transplanting in the Dark of the Moon–we must remain aware of the pull of the Lunar orb, and the way she symbolizes progression, and so growth); it’s also time to create, especially with Ceres kicking off her transit of Taurus with a first aspect of sextile to Neptune. This will enhance imagination and inspiration, and give even the dullest of us some truly fertile creative material and some unique, nature-keyed inspiration 🙂

If you have natal placements in Taurus you’ll likely take on a Ceres-type persona as she contacts the body or point; if you have natal placements in Scorpio, as Ceres makes opposition contact you may find yourself up against a Ceres-embodying individual, and in this latter instance, whatever you do, don’t attempt to negotiate–Ceres can’t be beat in the hammering-out-a-compromise department. In square by transit to a natal placement, Ceres may present us with a conflict via temptation: we may be drawn away from appropriate expression of the contacted energy with the promise (or mirage) of sensual comforts or delights, or with an offer of authority of our own.