Mercury goes direct on the 17th, at 1:03 PM PDT, at 5 Pisces 38. A chart for the moment of direction of a body can often tells us a little something both about what the retrograde meant, and what tack the planet will now take in forward motion. This kind of chart may resonate through the coming weeks simply because the planet will be at its most ‘still’ point at this time, as motionless as a body ever gets, and so may ‘mark’ the Cosmos with a particular vibe. Keeping our usual strict 2 degree or so orb, we see that Mercury turns it around in aspect to the Moon (a square) and Neptune (a conjunction)–and for depth we note the wide-ish semi-sextile to both Mars and Uranus in Aries.

This combination of aspects suggests some hard emotional and intuitive truths may be revealed, likely through exchange of info, gossip, or thoughts with others (Gemini), or through something written, which contradicts what we perhaps idealized, misunderstood, or were mislead about (Merc in Pisces conjunct Neptune). With Mercury having spent the entire retrograde in Pisces, we can be fairly sure that there is something we missed over this period, something we imagined we knew or understood, or some condition we assumed was in effect that was not.

To be fair, though, there was also the potential for something fantastic to be born in this retro period; many of us came up with the spark or idea that will change our lives, take us in a new direction–and we may not even recognize this, yet. Particularly if your new idea or direction involved both a creative and a co-operative element, you are already on your way to realizing significant changes to the way you   ——–  Fill that in with the matters of the House ruled in your natal chart by Pisces/ Neptune.

This retro period dared a lot of people to dream; now, with direction, the work of making those dreams realities begins, and the first order of business includes a confrontation with emotional realities and information previously not known (Moon in Gemini), and a re-forming and re-visiting of the creative entity birthed since the retrograde began (Merc conj Neptune–but you’ll notice Mercury is ahead of Neptune, and so will not make exact contact again, emphasizing that this will not bring new creative visions, but will only feature them over the time between direction and Superior Conjunction). The informal contact from Mars and Uranus in Aries says that our main ‘instrument’ will be our own Self-interest, Will, and initiative, driven by our unique point of view, the support of the group, and the general willingness of all to innovate–we’ve got nowhere to go but forward from here. 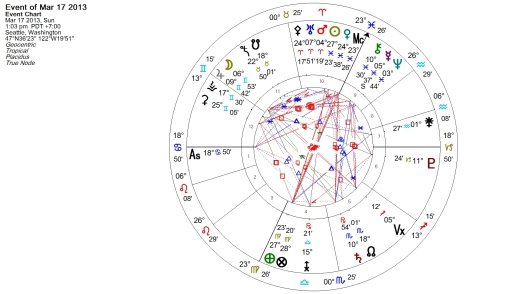 For much more, including the complete astro forecast that features an hour-by-hour Lunar forecast, articles, and commentary, please subscribe–thanks! And this week the issue’s a double!

Helpful re-tooling for the direction at Digital Journal