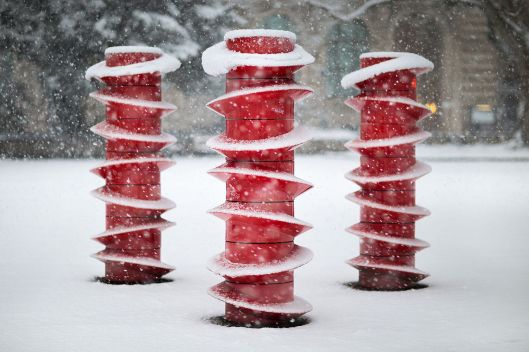 Tension, as the Moon leaves the sign of the eclipse, Aquarius, and as Mercury is only about thirty minutes from the point at which it will retrograde, on the 12th–when the usually-swift messenger hangs like that it almost feels time itself is suspended–we may return over and over to the thought, ‘I just wish things would move along!’ This is not unusual for that valley between eclipses–we just have to ride it out. Our best bet may be to concentrate efforts on Saturn as Jupiter (expansion, ‘the facts’, knowledge, the social order) moves toward a sextile–that is, real-world activity, concrete accomplishment, following the rules and making things stable, secure, and a little buttoned-down, as we’re going to get ‘more’ of these, very soon. It’s a day to create a mental ‘Thunder Shirt’ that calms, whether we can pinpoint the source of the anxiety or not. An Earth trine between Merc-Vesta in Virgo and Pallas in Taurus might show us a way out, by suggesting we keep our thoughts on the data, the details, and centered on what matters most, and then taking practical steps using skills to implement what we see, learn, think, in the material world. We focus on clear planning that works with things as they are, and taking down-to-Earth steps forward, and the rest falls into place.

Today’s word image is a sea lion at the circus, being made to balance a ball on its nose. This is an image that used to signal fun and now suggests that we have no right to keep these creatures captive for our amusement–just ask this girl grabbed by one–if that isn’t a message from the Collective Soul of sea lions everywhere to respect their space, then I don’t know what it is! This image may suggest we have some old ideas about how things or people should function in our lives that need re-working–or it could be that we are being asked to perform for others in ways that are outdated, or that disrespect our free Will. Are you one of those people who longs for the ‘old days’? Well, don’t–we tend to forget just how far we’ve come, and how outmoded all those old ways of doing and being really are.