The 12th can be a shadowed place, and we can be less than conscious of energies that reside there. ‘The Florence Griswold House in Old Lyme, Connecticut’ By Willard Leroy Metcalf 1905 {{PD}}

If you’re a chart energy, and you’re sitting in the 12th House, how do you express? If there’s one word that describes the 12th, it’s ‘indirect’—and that makes energy expression sometimes tricky, sometimes cumbersome, and always challenging. This energy can shine out through other outlets, such as when Saturn in the 12th brings discipline, order, and perhaps rigidity to the affairs of the House it rules, and all of it applied unconsciously on the part of the individual; it just seems natural to them, somehow, and there’s typically an assumption that everyone sees the affairs of the House Saturn rules in this same way—and as well that others carry these same energies in that same, ‘hidden’ place. An assumption is a good way to describe an energy placed in the 12th that doesn’t have a deliberately chosen outlet; we tend to see it as ‘just the way things are’ and sometimes it shows as a very prominent characteristic that others see right away and the individual is totally unaware of. The obvious outlets of aspects made and Houses ruled is of course a possibility—but we shouldn’t forget the potential for expression through the functions of the House for the individual: the 12th is just as active as any other House, it’s just that the individual who ‘owns’ the chart can’t observe the effects directly.

Some possibilities for 12th House expression include:

Unconsciously  With this outlet contents of the 12th, including energies of the sign in the 12th, may leak into everything. With this the most important thing one can do is become very familiar with those energies represented by items in one’s 12th, and then watch for these to crop up day-to-day. Spotting them in real life will help attune consciousness to their presence, and so make them that much more manageable. When we have the ruler of other major chart energies here (as in Winslet’s case, see the ‘Moon in the 1st’ article) a huge component of expression of these energies will be influenced by the unconscious; that can make 12th House connections much more important than we may realize on the surface. In Winslet’s case, for instance, ruler of 1st House Sun, Moon, and Ascendant, Venus, sits in 12 in Virgo, suggesting that an unconscious critical attitude toward standards of Being, identity, feeling, and of beauty, worth, and presentation are all inflicted on the 1st House assortment of core identity energies.

Through the Collective  We may experience our 12th House qualities through projection of these qualities onto the Collective (a 12th House Mars individual may see society as angry and aggressive, but not see those same qualities in themselves), or 12th House energies may be the way the individual connects the Self to everyone else. For instance, a 12th House Venus could see her fashion sense and taste as the way she is a part of and in shared experience with the larger social order, with a sense of inspiration running both to her from society, and from her, as she channels the Cosmic, spiritual, or Collective.

Through involvement with Causes and Concepts bigger than the Self  This can include institutions, spiritual movements, mass experiences like disasters or events like Woodstock or the Million Man March. A larger thing creates a common touchstone for many. Here the Self gets lost under the larger label—and so may mistake the cause or idea or concept itself for the personal identity; Chiron in the 12th may be especially prone to this, as the placement draws out the Chirotic inclination to giving up the Self for others—or in less flattering terms, martyrdom. 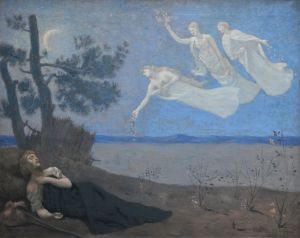 In Dreams  A 12th House concept may express only through the imagination (a daydream) or in the real-life nocturnal activity; what’s in the 12th may be seen as something unattainable in the form the individual longs for. Someone with Venus conjunct Pluto in Libra here, for instance, may long to be overwhelmed by a romantic relationship; anything less than devastating may not seem to the individual as truly a Love experience.

Overall we have the tendency to either see 12th House factors as ‘very much who we are’ through assuming they are like that for everyone, or we may disown them, exemplifying that 12th House ‘hidden’ quality. That’s a large part of why the old definition of the 12th was the ‘House of Self-Undoing’—if we didn’t discover and own those qualities found in the 12th, we would end up, as another common descriptive phrase put it, needing to ‘serve or suffer’ to make it all right.

12th House Personal Placements in Brief—elaborating on just a potential or two for each of the major personal chart energies:

Mercury here could mean the person’s communications are like a stream-of-unconsciousness delivered directly to the listener, making very clear what the real, underlying thoughts and motivations are. This person may have a direct line to the Cosmic, but may not be especially good at consciously translating what they know so that it’s sharable with others.

Venus in the 12th can suggest someone who doesn’t really know their own beauty or attractive qualities (they may never feel beautiful, no matter their physical state or the feedback they receive, or conversely may assume they are beautiful or easily lovable), who has Love as the motivating foundation behind all action, or who believes they may never know personal love (or who may see the Universe/ God as Love, and so dedicate the life to service). This person may also attract money from hidden or unexpected sources and could be the ‘money man’ behind someone else’s business or efforts.

Mars here can be the classic individual who is exceptionally angry and yet unaware of it—‘butter won’t melt in their mouths’ and yet they always point out (and condemn) the anger in others—no one is allowed to be angry on their watch! This can also be the person who can be highly effective at translating inspiration into action, and who may be unafraid to act on received messages, dreams, or intuitions; they may act bravely without even thinking about it.

The Moon in this spot can mark an excruciatingly sensitive individual, an intuitive or spiritual ‘genius’, or someone who escapes to emotionalism every time they want to hide from the unpleasant. (See my upcoming book on the Moon in the Natal Chart for more details and potentials).

The Sun in this House may make for a natural modesty, an extremely creative individual, a natural Priest or Priestess, or someone who can exert great control and offer great support in a ‘behind the scenes’ position.

Scroll down or click for the latest installment of ‘The Ascendant Zodiapedia’, donate to your favorite astrologers or those who aid you, read, and have a great day!

3 thoughts on “The Viewpoint From the 12th House”