The New Moon perfects at 4:48 AM PDT of the 15th at 24 Taurus 36, within range of conjunction to Sedna, and, despite a relatively large aspect orb, we’ll count the trine of the New Moon to Mars in Capricorn, as the Warrior’s 29 degree placement suggests an assertiveness that can’t be ignored (with its’ current square to Uranus bringing in an element of suddenness or surprise). This may drive the entire NM dynamic, as a must-be-satisfied Mars forces action or decision-making that just so happens to also carry along a deep, denied, and possibly destructive undertone (slightly closer trines to Pluto and Black Moon Lilith, together in Capricorn)–and all this will be happening somewhere deep inside, whispering in the psyche sotto voce, and these may prompt responses from the instincts or those places where we ‘know but don’t know’, leading us in a way most true to our inner angels and demons, rather than in the guise of our conscious choices and intentions.

We add to this a loose semi-square to Juno in Aries, a sextile to Hygeia, and a semi-sextile to Venus; these are likely to be subtle but conflicting influences: one tide in the direction of healthy and loving action, effective moves that promote well-being and that may soothe relationships or finances, with an opposite impulse to have one’s way (originating from a sense of previously having been disrespected), taking that out in small ways in relationships or minor financial indiscretions or petty withholding in either arena. 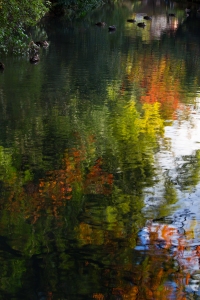 Scenery of the pond at Shitennō-ji Honbō Park in Osaka, November 2015 Photo by Laitche CC BY-SA 4.0

The Sabian symbol for the New Moon is, ‘A Vast Public Park’. This suggests openness in material matters; Nature shared, resources mutually held, a new state related to these begins. What we hold in common, under a civilized agreement preserving something in a natural state for the benefit of all, takes a new turn. We might ask: how long will that ‘park’ remain a public resource, an environment to share? Replace the word ‘park’ with the appropriate subject related to the NM placement in the natal chart for clues as to where the ‘new start’ may show itself.

It all makes for a kind of earthly upset; could we draw connection to the way Kilauea is splitting open, discharging what’s been below the surface, re-shaping ‘what is’ and the very Earth itself, hot, ‘angry’ (though it’s a bit of a crime to personify Nature that way), spilling forth the destructive and transformative, what ’til now has been hidden, or even denied (as some built their houses amongst the old lava paths)? Sure, we can make the correlation, but for the vast majority of us, we’ll experience this New Moon on a smaller scale and in much more personal ways. The earth may move beneath our feet, opening up to reveal some fairly heady, dangerous stuff, but most likely we’ll experience the New Moon as we experience all extreme points in the Lunar cycle, as an emotional shift, a feeling revelation, a small but vital chance to start over.

And on Uranus’ same-day move into Taurus—

You might want to try this, over at ‘Been There, Done That’