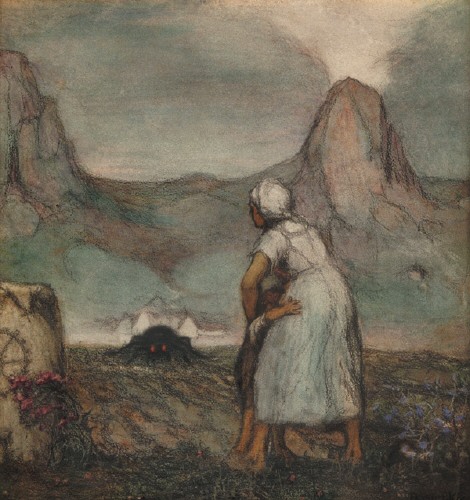 No real way to completely avoid the spiders, so concentrate on extricating yourself from their webs. ‘Die Schwarze Spinne’ By Franz Karl Basler-Kopp {{PD}}

We are victims of that tangled web we find around us, our part in it mostly being that we were cooperative, stood by in one place long enough to see it woven around us, didn’t object when those first silken threads were laid down! The thing about a web is that all the lines are entangled, each leading to several others, and they to others, and we bouncing in the middle, not sure where to snip to free ourselves. Our wisdom is questioned and others, one way or another, ‘attack’; we reject the social sphere and/ or what we learn (we are smart to), as the facts of the matter simply do not paint an accurate picture of reality–and yet, they do reflect the way our ambitions and desires have shaped things–for the most part, though, not having come out the way we’d hoped, and with a lot more entanglements and consequences (the web) than we’d ever anticipated. Venus’ entry to Libra and trine to Black Moon Lilith is our way out. We once again employ cooperation or partnering with others, but this time with an eye to meeting head on everything we’ve ignored, denied, or been angry about. Too, we may be constrained from speaking out, but that’s mostly about how others don’t want us shining a light on the facts. Do it, though; that will clear the air, and blow a heck of a lot of that web-work, and the sticky situations involved, away (Jupiter sq Pallas, Mars sesq Ceres, Mercury sxt Zeus and sesq Saturn, Sun sq Jupiter).