The Solar eclipse perfects initial contact at 9:12 PM PST on the 25th at 4 Capricorn 06, with both Sun and Moon just over one degree from conjoining Jupiter. A meeting of Sun, Moon, and Jupiter in Capricorn speaks of everything (the attention, the emotional nature, the intuition, the fears, ‘the facts’, the public, the nations of the world) all focused intently on the material state of things, the surroundings, and the rules, restrictions, and structures, governmental, societal, familial, that give it all form and make it all tick. We may be intent on making all this bigger, in some way, in constructing (or possibly deconstructing) something greater than ourselves, fueled by our beliefs or philosophy, or by the inspiration we get from what’s unusual, new, foreign. In any case, the inception point marked by the eclipse event is one of generosity, abundance, of largesse and, possibly quite literally, of more; whether that is desirable or simply exaggerates our fears (especially our fears of restriction, suppression, or of governmental or other authorities controlling us), giving us more of what we don’t want, is an individual matter, probably concentrated in the subjects of the Houses across the Capricorn-Cancer axis of the natal chart.

The eclipse forms a Cardinal T-square with Chiron, but one that is separating, the Sun-Earth axis well into the process of moving beyond orb. That suggests that what precedes the event is a dynamic and difficult circumstance that creates tension and maybe outright conflict, the source of which is one or more of our own wounds or ‘weak points’. Eclipse events may come from this, as a consequence of previous choices, or the eclipse may disrupt this, possibly implying that the problem we thought we had is losing validity in light of (or more literally, in the shadow of) eclipse events.

The Sun-Moon-Jupiter also noviles Mars in Scorpio, implying that, despite any trauma or upsets that occur, our choices and actions will aim at getting to the Truth, to the facts, and that what we choose to do about things at this time holds a touch of genius, inspired in the creative way we go about it, in the moves we make.

The eclipse also trines Uranus in Taurus, but again, this aspect is separating; the implication is that, after taking an original or inspired approach we are onto the next thing with the eclipse; that is, eclipse events, like those associated with Chiron, may be springing from this Uranian effort. We may have asserted our uniqueness, used ‘modern’ methods, rebelled, been unreliable or erratic, may have been surprised or ambushed in some way, and our relationship to ‘the group’ may, through our choices or theirs, have caused the Solar eclipse new start.

An eclipse in Earth creates an abrupt shift, one that ripples out like an earthquake; sometimes those are deep and barely perceptible, while other times the moving and crashing together of the tectonic plates shakes and rolls everything in its energy path. The size of the effect generated in the individual life is difficult to judge ahead of time, but we do know that at the very least an eclipse changes the backdrop against we operate, specifically, in the case of an event in Earth, the material conditions, resources, and physical matters surrounding us, and can temporarily put a specific other set of conditions into play (designated by the aspects the eclipse forms), from the event itself through to the next Solar eclipse in six months.

The Sabian symbol for the eclipse is, ‘Indians On The Warpath. While Some Men Row A Well-Filled Canoe, Others In It Perform A War Dance’. Yes, some of the Sabians are dated, and at times clearly and condescendingly taking the predominant-at-the-time white, male viewpoint. And yes, I know that these were channeled by the gifted Elsie Wheeler, a woman–but that doesn’t mean she, like so many of us, wasn’t subject to seeing things through the dominant lens of the culture of which she was a part.

Okay, now that that’s out of the way, we can get to dissecting the symbol. First, nobody dances in a canoe. Ever. Or at least, they don’t dance for long in a canoe–so right away, we know this image is emblematic, rather than realistic. Too, ‘Indians on the warpath’ is an old stereotype that has entered the language as a phrase meaning, ‘Somebody’s angry and looking for someone to take it out on.’ There’s an implication not just of aggression, but of unreasonable aggression, of a wish to wipe out an enemy.

There’s also irony within this symbol: the Indigenous Peoples of North America were very nearly themselves wiped out, and certainly remain disempowered to this day. The image suggests a people at their apex, and with hindsight applied we know this will not last forever, crumbling beneath the relentless onslaught of the Europeans, of what’s foreign–the epitome of the world-expanding Jupiter for both natives and intruders.

The symbol may suggest a warning. Individually and/ or Collectively, we may be at an apex; new things will be introduced, things will change, and it may be important to realize that a change in attitude, tactics, approach, and interactions may all be necessary to survive, and hopefully thrive.

There is an opening up, a state of expansion, that occurs with this eclipse within the confines of those Capricorn elements of the life–and this eclipse and its events may act as a safety valve, keeping the whole thing from blowing up, and so keeping us from a wipe-out, even as it’s clear we need to adapt to all the changes over which we have little or no power.

Potentially of note is the fact that on the West coast of the US the perfection chart has a 00 Virgo Ascendant. Even though this isn’t a Horary or Electional chart, where that would have definite meaning, we might surmise that the new beginning promised by any New Moon, and the powerful one augured by a Solar eclipse, would be amplified in an atmosphere where the ‘birth’ of the event bursts on us as a new ‘moment in time’ (and so connection to the world, as symbolized by an Ascendant) occurs. This describes a brand new attitude that accompanies the new beginning; Virgo suggests our initial approach may be critical, believing assessment is the way to get a grasp on things, and as well, believing that making a critical ‘statement’ about things will bring a kind of ascendancy. Friends on the West Coast, keep an eye out for this–for me it brings to mind a Washington state legislator who’s been charged with domestic terrorism–certainly those kind of actions constitute a critical statement about the current structure (Capricorn), with both eclipse and Pacific time Ascendant in Earth, suggesting something materially affecting ‘what is’ may be on the agenda. Or is it an earthquake, with Ceres (Mother Nature) in perfect sesquiquadrate to the eclipse chart Ascendant? Time will tell. 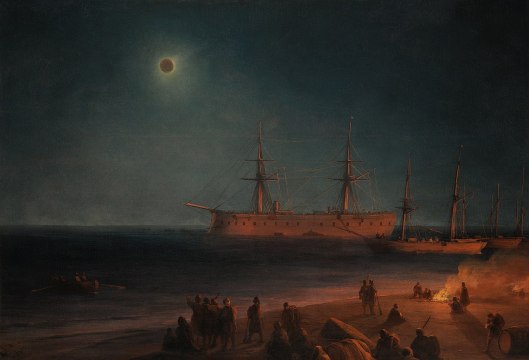 Here’s an interesting link to a list of the Saros solar eclipses to which the upcoming eclipse belongs. The most recent in this series was in December 2001, and I went looking to see if there was any suggestion within events the last time that could be harbingers for this time–but that’s a true rabbit hole, with events that month including the Battle of Tora Bora and the shoe bomber incident that caused us to forever after have to take off our shoes at the airport. The Saros cycles aren’t something I spend a lot of time investigating, but there are astrologers who make it a regular part of their work, such as the groundbreaking Bernadette Brady–so you might want to start there, if you want to know more.