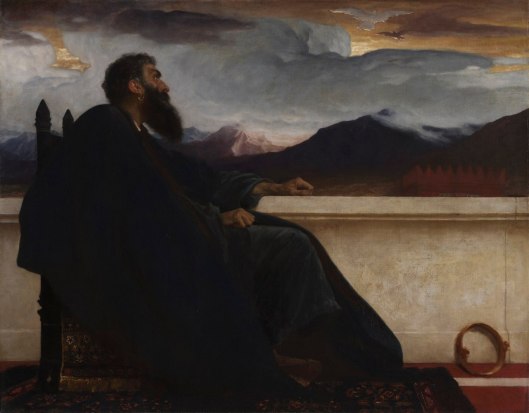 By ‘The One’, I don’t mean that magical someone who, we are taught (especially when we are little girls) will change our lives–or am I? I’m talking about each one of us–and in that sense, we are indeed ‘The One’ who can bring about change, hopefully for the better. Required isolation is putting the emphasis back on Self-responsibility, on taking the needed initiative individually–and this New Moon reflects that.

Moon and Sun meet at 4 Aries 12, at 2:28 AM PDT of the 24th, just before conjoining Chiron and the Black Moon Lilith point. This suggests a strong new course for healing by paying attention to all those things we’d rather ignore–or, in a less likely scenario, a deep, primal wounding via those factors we’ve insisted on ignoring–but in Aries, we are each, as a single entity, allowed to take our pick, to make our choices (or to garner the results of those choices already made).

The New Moon combo is moving toward perfection of a semi-sextile with Uranus in Taurus–something we don’t always need to take note of, but in this case, we do, because it’s approaching, rather than separating–and again we see the importance of the individual, this time as playing a role within a group (the dual symbolisms of Uranus), and all of this figuring in to the welfare of the environment (Taurus) as the group and individual are both part of it, and as they affect it.

The New Moon also forms a semi-square to Venus in Taurus, which in this chart is in its own sign and rules Earth, Juno, Zeus, Sedna, and Uranus, as well as a semi-square to Ceres, which places the New Moon at their midpoint. We could call this ‘The Worth of the Earth’; the bodies under Venus’ rulership suggest that we come to a new assessment of the value of human autonomy (Juno), the costs of ambition on a larger scale than that of the individual (Zeus), and of the price of paying no attention to our instincts and what we ‘know but don’t know’ (Sedna). The NM at the midpoint says that a new path must be found, a new balance, between Ceres in Aquarius (the demands of ‘the modern’ on Mother Nature, a new, progressive view of our relationship to and obligations to Nature and the natural order) and Venus in Taurus, which in a least one expression tells of the human need for material comfort and sustenance, which are gleaned from the environment and its products and assets.

In fact, the square between Venus and Ceres forms the base of a Fist, with the apex the Earth in Libra: it’s only by cooperation, by caring for others as much as we care for ourselves, that the New Moon tension can be resolved and reach some sort of accommodation between Nature and Humankind, a resolution that supports the health of the Earth, as well as the health of her inhabitants.

There is also the way the Sun-Earth axis, joined by the Moon, continues a Cardinal Grand Cross/ Square, for those who accept the Nodes as valid configuration points (long-time readers know I do). The need for action is both clear and fundamental to the way forward; we must deal with what we’ve wrought, in a way that handles both material and spiritual realities, and that recognizes the  rate of the passage of time is a crucial factor to success.

Though it’s a wee bit wide for a New Moon sextile, we can include Vesta in Gemini, if only because the symbolism is so striking: our ultimate values, what we find sacred and dedicate our energies to, are renewed, re-dedicated at this New Moon, as each individual takes action, makes our choices, takes on a new way of thinking (Gemini) that defines both our priorities and the way we will live day-to-day (around the Vestal hearth). 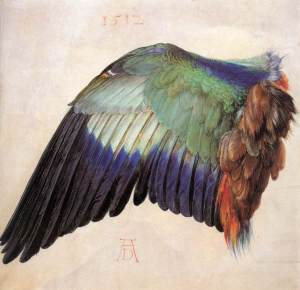 The Sabian symbol for this New Moon may confound us, at first: ‘A Triangle With Wings’. A flying inanimate object–I can’t help but picture a cold geometric shape with the feathered wings of a dove–makes an absurd image, until we think of the way a triangle is balanced, each leg in equal proportion to, and supporting, the other two. It’s this state of true balance that the New Moon is sparking in each of us, via the mechanism of individual choice, responsibility, and commitment. The wings are the symbolic equivalent of the spiritual component of all endeavors, reminding us that a kind of flight of the spirit is what we are always seeking, always aiming for, working to lift ourselves ever ‘higher’–and this image tells us that lift is achieved by attaining that balance. Usually we see this as an inner function, a personal goal, but the Aries New Moon tells us that spiritual ascension is possible only with the correct measure given each of the three legs of the triangle: the individual, the Collective, and Mother Nature Herself. 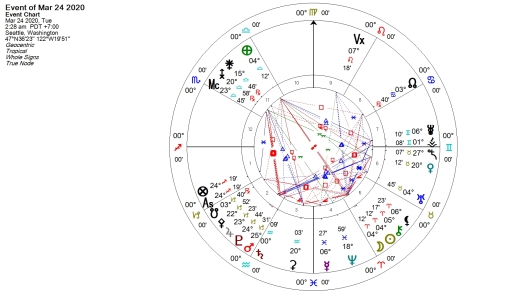 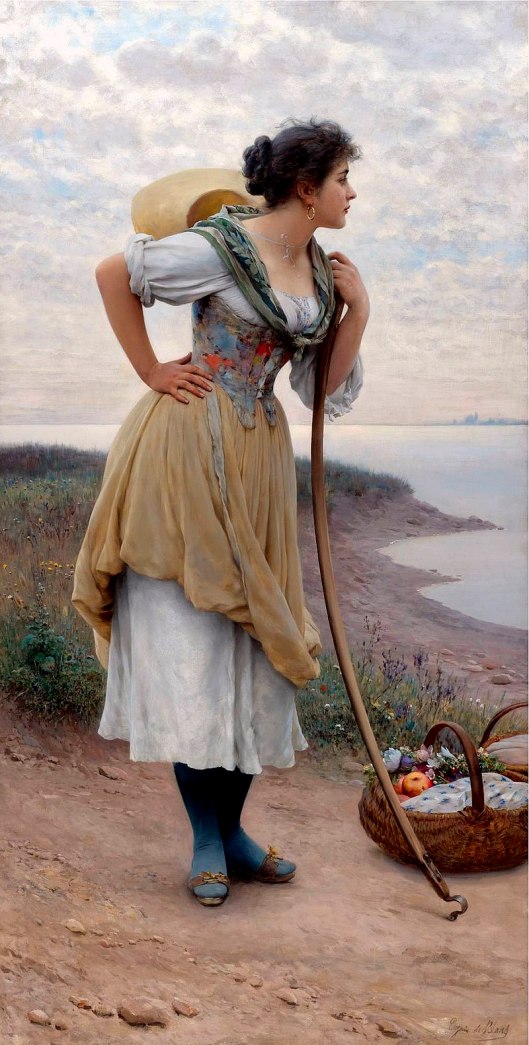 That’s pretend me, waiting to get back here! ‘Awaiting the Return’ By Eugene de Blaas {{PD}}

We’ve moved, a ferry ride away from our old house, but what feels like a world away from Seattle. The new place is in a forested neighborhood near the water. Eventually I’ll show you some pictures of my favorite things here, particularly of two giant cedars, a pair of does that graze behind the house, and of a group of trees, dead but still standing, like an elongated, bleached bone crown on the hillside. It’s peaceful here, a perfect place to recover from the cold–or maybe light flu?–that’s lingered for the past 3 weeks, both delaying my return and continuing to leave me more fatigued than I expect to be.

So, I missed our daily chats, but really–I leave you all for five figurative minutes, and somebody gets a pandemic started! Humans are constantly generating, constantly creating, and so is every other living thing. This can’t entirely be a surprise, especially since we’re in prime flu season in the Northern Hemisphere; but that doesn’t make our new reality of isolation, and considerable uncertainty and fear, any easier.

Rather than re-tread ground that many others have examined astrologically, ad infinitum, I’ll just say that the current Capricorn stellium of Pallas, Jupiter, Mars, and Pluto, all sited within less than a 3 degree span of one another, do speak of breakdown, of cells and the social construct, with normalcy the victim of virulence, of drastic, extreme choices, of belief as it clashes with ‘the facts’, and in some, a determined effort to defend the status quo, even as wisdom tells us change must happen, for the good of the public, as well as the survival of the individual.

This grouping is headed toward, at different rates, trine to Sedna in Taurus, toward a meeting of change and destruction and the need to make choices, over and over, that dovetails with what we ‘know but don’t know’, with what we instinctively react to, and with what we have judiciously remained unaware of via our ‘blind spot’–that last encompassing the Taurean realities of Nature itself and the way certain among us have bet that we wouldn’t meet a crisis, so we didn’t need to be informed, didn’t need to care–and the wheel turns, and we see what a bad bet it was. 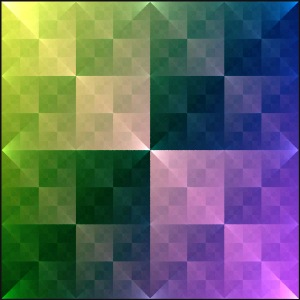 But what I want to draw your attention to is a Cardinal Grand Square, involving the Sun/ Earth axis, along with current players Chiron-Black Moon Lilith in Aries and the Nodal axis. As the Sun-Earth move toward closer engagement by degree we see the tension of the Cardinal imperative to do something pushing against the individual injury/ weakness and the way we may be tempted to ignore or deny the role of the individual, or the importance of the choices the individual makes and the actions one takes, in what is happening–and all of this charts the course forward, as the future rolls out from what’s been done and dealt with (or not) in the past.

I don’t mean to heap responsibility on the individual; I’m only trying to say that the astrology speaks to me of the vital role each of us can play, simply by doing what needs doing, as long as our choices are informed by both the facts and our awareness of the needs of the Collective. Our individual efforts may be small, but they are all building blocks in the well-being of the planet and humanity–don’t ever think they are inconsequential, that they don’t matter–and really, it’s likely to be that in taking responsibility on a personal level, we gain in ways we haven’t yet thought of.

I want to know what you all need from me at this time. I can’t promise I’ll be posting every day, as I’m still not up to par, but I’ll do my best. Put suggestions in the comments, and I won’t make them public–you’ll just be talking to me about what might help you on this page. And many thanks to all those who commented, or wrote directly to me while I was away–it’s appreciated, though you should know that I don’t generally see these things until I return. When I get off line, I really get off line!