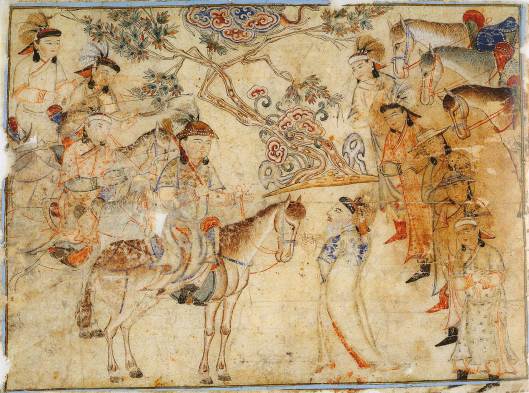 In this 14th century picture we see Ghenghis Khan in negotiations, in watercolors and gold on paper, from a work by Rashid-ad-Din {{PD}}

Lately the whole world seems to be wondering what Kim Jung-Un, leader of North Korea, is up to. In ECLIPSE I wrote of him: ” . . . there may be a need to be rebellious, but if one sees the past as having contained ‘the revolution’ what does one then revolt against, in order to continue to identify as a rebel? If one has an international stage upon which to act, then one with Mars in Libra, and Pluto and Saturn in Scorpio, all in the reputation 10th, may make shows of anger at ‘partners’, and threats of destruction and obliteration to show one’s authority, a mainstay of the agenda.” My conclusions were that Kim’s father set the behavioral expectations, and may have contaminated his son with the idea that only shows of force gain one the respect of others–but it also appears to me that Kim’s natural inclinations are to be co-operative, to commune and share knowledge. It may take a long time, but, if Kim can refrain from listening to any ‘old school’ advisers, he may eventually stop the threats and open up to new forms of exchange; in effect, he may ‘rebel’ against what he was taught. He is coming up on his Saturn Return (if the birth chart rectified by Paul Saunders at Solaris Astrology is correct, which I think it probably is), a time when he may be particularly determined to show how far he’s come, what his ‘accomplishments’ are–so it may feel to him especially important to let the world hear him roar, right now. At most I think NK may fire a missile into the ocean–I’d be very surprised if it went much farther than that.

Subscribe to or Renew ECLIPSE for 6 Months today, the 10th, or tomorrow, the 11th, and receive three extra months FREE! Sign up for a 3 Month subscription and get one free month, or get the Daily Word (the forecast as it appears in ECLIPSE) sent day-by-day to your email and receive a free month if you sign up for three or more months. Signing up today or tomorrow means you’ll get this week’s issue, which has complete info on the first Lunar eclipse of the set (for 25 April, ‘Acting on the Dream’) and lots more  Thanks to such a great response, I’ve extended the special through the weekend! Bonus Months given through the 14th Pacific time—so what are you waiting for?