When we look for Jupiter activity as part of the life purpose, we may tend to dismiss it as more of a role designation than anything else: we see it as strong in educators, the clergy, publishing and broadcasting, those concerned with religion, those involved with travel or foreign lands in some way, or with those linked to Jupiter prominence by Gauquelin’s now legendary study, to include politicians, those with career military involvement, and playwrights–at least, that’s the conventional theory. But I find it much more strongly indicative of a strength of spirit, one that signifies a Soul-need to expand outward, to connect with others, and this need shows up in all walks of life (though Gauquelin’s study did not connect Jupiter to physicians–in fact he showed a Mars prominence for them, at least in terms of placement in the energized sectors surrounding the angles)–yet our example is a well-known oncologist whose seminal work has changed attitudes and treatment for millions of patients and the attitudes of health professionals, and in this way it’s pointed out to us that the spiritually oriented impulse to connect with others overrides every other interest and function, and typically works in concert with other life callings.

Surgeon and cancer specialist Bernie Siegel (14 October 1932  10:00 AM  Brooklyn  NY USA) helped revolutionize the way both patients and health care professionals look at the disease process and the meaning of it as an experience, one that can promote spiritual and emotional healing no matter the physical outcome–and yet we now may forget that there was a time when the mind/ body/ spirit connection was not only not acknowledged, it wasn’t even recognized as existing by the vast majority of individuals, and was a particularly unacceptable idea within the medical community. Despite advances in mental health methodologies, and the promotion of psychotherapy as an increasingly more interactive means of exploring mental process, we were still, well into the 70s, warned by the medical establishment that physical disease had origins only within the physical world; to suggest to one’s physician that emotional ills might be connected to physical ones immediately earned one a label as less-than-rational, and to imply that a spiritual dis-ease could be at the root of things . . . one could be stamped ‘delusional’ and dismissed (and for a woman this kind of labeling could be truly dangerous, as in the male-dominated world of medicine the tendency afterward was often for dismissal of reported symptoms, as well).

In the late 70s and early 80s, Dr. Siegel formulated ideas about the mind/ spirit/ body interaction based on his own observations in treating cancer patients, and formed the first ECap group (Exceptional Cancer Patients), based on the idea that those who survived medical therapies and went into remission showed some distinct characteristics: a generally optimistic orientation to life (and typically an early programmed belief in their own toughness or that they are a survivor no matter what), a real desire to live life (rather than a desire not to die), and a belief that the medicine offered actually helped their condition (and Dr. Siegel points out in one of his books that if you read the protocols on a chemo package you see mention only of the destructive things this product will do to one’s body, and nothing about healing or helping).

Dr. Siegel pioneered the use of art and imagery in healing; specifically, by studying patients and their drawings he found a way into the subconscious, to see what the individual really believed about his or her illness and the effectiveness of treatment–as well he encouraged patients to use imagery in conjunction with medical treatments, believing that this linking of physical and mental intents toward healing vastly improved results.

When we look at Dr. Siegel’s natal chart, we see some factors that illustrate his life focus and his inclinations very well. The most immediately striking feature may be the Cardinal Grand Square involving the Libra Sun in the 10th (the Self must shine publicly and in relation to others), the Pluto/ Vertex conjunction in Cancer in the 8th (dealing with and empathizing with the darkest experiences of others, handling destructive forces of others, is a fated involvement–Vertex as a point of Fate), an exact conjunction of the Moon, Uranus, and the Earth in Aries in the 4th (the Self carries emotional groundedness and innovative and intellectual ability, some of which may spring from the family of origin–and this is verified in Dr. Siegel’s stories of the positive survivorship mentality instilled in him by his relatives), and Ceres in Capricorn in the 2nd (a serious, fact-based understanding of and command of nature and negotiation as a personal asset). The configuration promises that when one is activated all are activated, and that the inherent tension among the factors spurs the individual to action (Cardinal placements).

So how does Jupiter as a significator of the spirit figure in to this dynamic life picture? Contact is made through a trine of Ceres to Jupiter, which sits in the 9th (in this case, taking an educational function for expression), and conjunct the South Node (past experiences come forward to aid the present), Neptune (in this instance, Art, imagination, imagery), and Venus, Sun ruler (values, relationships, love and caring). Here, co-operation between Ceres’ energies and Jupiterian ones may signify that spirit acts as a bridge between the functions of the values and creative imagination and the life function in teaching and guiding others, just as Ceres acted as the bridge between the upper World and the Underworld in negotiating the circumstances of her daughter’s marriage to Pluto (and when we note Pluto’s position in the Grand Square it’s not a stretch to see how Dr. Siegel may act the part of bridge almost literally for his patients, as he has a clear understanding of and ability to negotiate the Plutonian journeys of those he treats).

His Pluto is also involved with a Fist of God configuration with Ascendant apex, the sesquiquadrates to Pluto on the one hand and Earth/ Uranus/ Moon on the other. This lends a strength, insistence, and dynamism to the expression of all related energies through the personality, and perhaps gives the remarkable ‘bedside manner’ and ability to both empathize with and instill confidence in those works with.

In Siegel’s classic book  Love, Medicine, and Miracles he quotes Jungian psychotherapist Dr. Susan Bach, who created one of the first effective and consistent methods for interpreting the contents of patient’s drawings for medical use:

The study of such spontaneous material could give us a glimpse into the psyche-soma relation comprehended as the oldest and best married couple on this earth . . .

Sound like anyone we know? Jupiter, in his role as supreme god was married to Juno, his beloved and yet much disrespected wife, and together they ruled all the other gods (energies), but in Siegel’s chart they have an uneasy relationship, the kind that keeps the individual busy attempting to reconcile the disparate goals and needs. Juno is involved in a Grand Trine with the old man Saturn and Chiron (in the 6th, a House prominently linked to health work), and this suggests nothing so much as the signature of a healer, someone empowered to muster Chirotic energies in the physical world–and this contacts Jupiter via his sesquiquadrate to Saturn, a combo that implies spirit is perpetually in adjustment to the realities of any situation, an attitude that when well-handled, as it is in Dr. Siegel’s case, brings leaps forward in the chosen life arena. 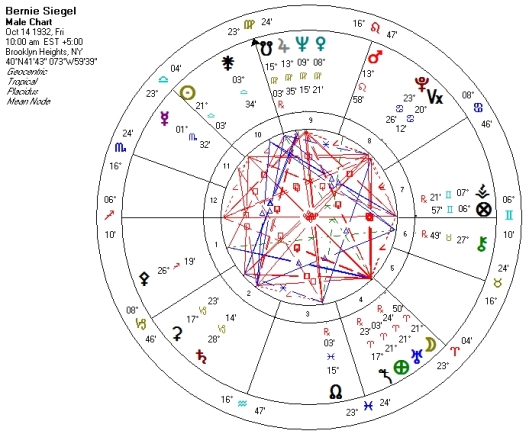 11 thoughts on “Jupiter and Spirit Pt.2: A Life Example”