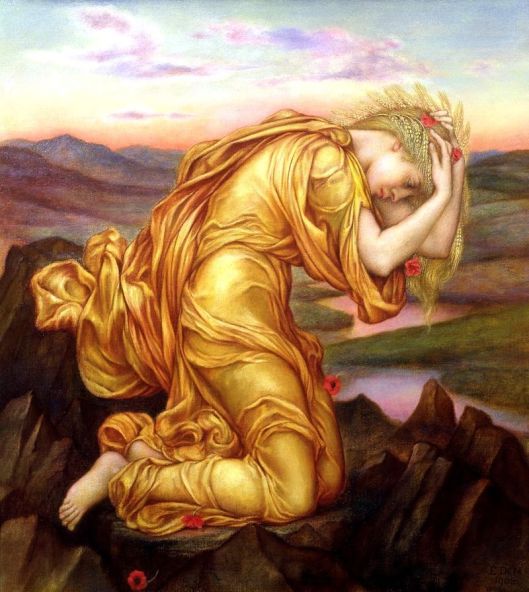 The 1st we see perfection of a single aspect, Mars square Uranus, but oh, that’s likely to grab us by the hair or other body part and give us a swing or two! In this equation, Mars retrograde in Aquarius is like the pull of an open drain, and Uranus in Taurus is our own Willfulness firmly dug into some facet of our material reality; Mars’ backward slide threatens our comfort, our sustenance, our resource. What we may not realize right off is that what’s happening is caused by our own choices or actions, and so can be changed by us at any time. It’s a wee lesson in just how much control we do have over our own lives–it makes it obvious, it’s much much more than we usually like to admit.

I’m a little put off when I see astrologers and others putting so much emphasis on Ceres/ Demeter as a mother figure. Yes, she’s Mother Nature, making her a kind of overarching symbol of fertility and Life in all its forms, but it’s in her as a personal mother figure that I have complaints. She’s probably best known from the story of how autumn and winter came to be (apparently, it was summer all the time before this). Her beloved adult daughter, Persephone/ Proserpina was abducted by Pluto, plunging Ceres into mourning, until she negotiated 6 months for her daughter above ground with her, and 6 below with her new captor–and the seasons were born, with spring and summer the times when Persephone was above ground, and her mother satisfied.

Now first of all, what kind of mother negotiates the terms of imprisonment for her daughter–what mother says, ‘Okay, kidnapper, you can have her for a while, and then I get her for a while’? That validates a kind of ‘might makes right’ mentality, as if because Pluto was capable of overpowering Persephone, he then had a right to ‘own’ her. Of course, Ceres’ own rule about eating when in Hades preventing one from leaving was part of the reason–Persephone had eaten 6 pomegranate seeds, condemning her to remain–but the real question is, Was Persephone kidnapped at all?

I have this idea that kidnapping is a cover story for elopement–it saves Ceres’ pride if she believes her daughter left her involuntarily–and a mother who doesn’t want to see her daughter grow up and exercise her free will (she ran off with Pluto–sex!–after all) is propagating a dysfunctional relationship, to say the least. So in my mind, Ceres is not so much an indicator of caring motherhood as she is a figure of inappropriately controlling ownership of another human being. She commands her daughter live at her side in enforced innocence, then insists she be given back, like a thing, then uses her power to finagle a deal where her child must spend at least part of her time in her childhood circumstances–and never once is Persephone asked what she wants.

We may tend to dismiss Ceres’ extremity of reaction and that of someone who cares deeply as showing Love–but caring deeply doesn’t remove the need to recognize the validity of others’ choices, their right to Self-determination, or negate their right to be autonomous. It’s an important distinction in all relationships: just because someone cares doesn’t mean they get to control who you are. Notice where Ceres is in the natal chart, with what it interacts, and think of personal authority, negotiative ability, connection to Nature, and inappropriate intrusion on the autonomy of others, especially offspring; leave the mothering to the Moon.

Speaking of Ceres, on the 2nd we have a single aspect perfecting, this time it’s Ceres sesquiquadrate Black Moon Lilith. Everything we’ve been trying to ignore or deny, or that has enraged us, pops back up in difficult ways when we try to exercise our authority, or when someone else who believes they should have a say over us makes their wishes known. Ceres is smack in the middle of Virgo, and BML is at 29 tense degrees; this implies those ignored matters are at a bursting point and can no longer be pushed aside, and it also means that our own critical faculties may make it very clear what’s wrong, and what must be done. For a number of us, this may spell reactive upsets related to diet or allergies, or even to the smoke from a multitude of fires burning around the globe, and some of these reactions may cause a true emergency. Proceed with care.

Someone asks, ‘Do we need to worry about whether an asteroid is retro or direct?’ I don’t think so, not yet–we haven’t had enough time to monitor each one sufficiently to know if this has an astrological impact. Since a retrograde is apparent, rather than literal, it’s nothing so much as a statement of viewpoint, not something that truly defines meaning. I find our attention is much better spent on learning the potentials of interactions among the planets, delving into the nuances, as so far (thirty plus years in) I’m finding that everything is already presented by planetary relationships–the asteroids only add definition and specificity to ‘statements’ already made in the basic natal chart.