‘Children dressed as Batman & Robin’ 1966, Courtesy of the Father of JGKlein CC0

This is a re-print from a November 2013 ECLIPSE. Please note that I was still using the Placidus House system at the time; the attached chart is the chart used to write the piece. This article has undergone slight editing, and has some added material.

Here in the US, it’s the time of year for costumes, and I remember in Germany frequently seeing them from mid-November through Lent for the extended Fasching holiday (the equivalent of Carnival in other parts of the world), and I’m sure there are other customary dress-up times–it all brings to mind the matter of identity. I always liked Batman because he was just a brave man who’d come up with some clever gadgets, rather than a superhero due to mutation, ingestion of poison, a trip to space gone wrong, or a nasty encounter with Gamma rays. The internet meme about Batman (‘Be Yourself–Unless You Can Be Batman–Then Be Batman’) revived this line of thinking for me; it brought forward the idea that it’s always best to be ourselves–unless we are in the position to be something extraordinary, something more.

Those would be fleeting times, to be sure; even Bruce Wayne was himself, most days. In that sense, to be a superhero in your own life is to temporarily don the guise of an Archetype. Perhaps we need the Self-possession of Juno to defend our status or our partnership, or maybe we need to become Ceres, to defend our child or our planet. We could need to wear Jupiter, to convey an All-the-Answers persona at a sales presentation, or we might seduce with the pure pleasure afforded by ‘being Venus’. In any case, there are plenty of times we slip into that Archetypal energy (as represented by sign and House in the natal chart that contains that environment/ subject) in order to accomplish something, to gain a sense of authority or mastery of particular elements that will show our competence to others. In essence, the donning of an energy that’s bigger than ourselves is a signal of what we’re capable of, a promise to those around us: for the moment, I AM this larger-than-life Being, with all the positives and negatives that implies.

This may make us ask two questions: one, are individuals especially inclined toward some energies more than others? and two, can this be seen in the horoscope? The answer to both questions is, Yes. We see in the natal chart affinities for certain energies, sometimes as they are carried by the person themselves (such as when an asteroid or planet is conjunct the Sun) and sometimes as they are seen by others, from the outside looking in (through, for example, the 10th House of reputation). 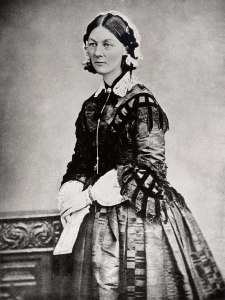 We find an excellent example of this in the chart of nurse Florence Nightingale, in spite of some uncertainty about the birth data, chiefly the time (Astrodatabank lists her as born on 12 May 1820 at 2 PM in Florence, Italy).  She’s an example of someone for whom ‘being herself’ entailed carrying a larger-than-life image and reputation. Her very name entered the vernacular as the Selfless Nurse Archetype; using just our usual natal markers (not even looking into the available canon of exotic asteroids) we find plenty to spell out Nightingale’s mission, and her fate.

Ms. N has a Virgo Ascendant; she comes across as practical, efficient, detail-oriented–we might as well call this ‘the Nurse Ascendant’. Her first contains the South Node in Libra, implying she gained her demeanor, and probably her skills, through past interaction with others. The 2nd shows Libra on the cusp=a diplomatic, Other-focused Self-image, with a talent for co-operation. Her 3rd holds a conjunction of Earth and Juno, suggesting she may have had access to status and authority through material circumstances–and this is true, as she came from a wealthy, upper-class British family. With Scorpio on the cusp, this House speaks of her extensive writings, many of which were intended to empower the masses (through education on medical matters–removing the Scorpionic mystery) and she also wrote of her philosophy of life and her vocation, to which she felt called by God (immersion in the Scorpionic mystery).

Her 4th shows a conjunction of Uranus (rebelling against family custom–4th–and societal custom–Sagittarius on the cusp and holding Uranus) and Neptune (‘new’ utilitarian ideals, sitting at 00 Capricorn). 5th ruler Saturn sits in the 7th, trine Mars; though she had several intense and long-lasting romantic attachments, there was no marriage or partnership; Florence repeatedly shed from her life anything that interfered with her calling. That’s a very Scorpionic thing to do, echoing back to the Earth-Juno conjunction in Scorpio, essentially describing the need to purge the material/ physical environment (including relationships) in order to contact her power. Aquarius on the cusp of the 6th shows the intellect emphasized in the everyday, and the House holds Jupiter, Sedna, and the Vertex=instinctive knowledge and response to her role as a woman (Sedna) brings forward her fate (Vertex) in service (6th) to the social order (Jupiter). The 7th holds Pluto, the North Node, Chiron, and Saturn, suggesting her life direction and reality were focused on healing others, and transforming the practice of nursing; as well, Pisces on the cusp suggests she may have appeared ungraspable/ unknowable, or even unreliable, in partnership.

Ms. N’s 8th House of others’ shared resources and support is ruled by that Mars in the 11th, and contains Mercury and Zeus. Others facilitated her expression of the talents she had to give the world (11th), helped her communicate, and fulfilled her ambitions–a pretty useful package, especially in those days, when women had fewer options. The 9th has Taurus on the cusp, holds the Sun, Moon (she was born just after a New Moon), and Vesta, with cusp ruler Venus in the 10th in mutual reception with the Moon=this speaks of making her name and becoming known for ‘comfort’ activities (Taurus) in a foreign land (9th), and says that this was what she honored in life and in herself (Vesta). With Venus in the 10th in Cancer, caring was the career, and fits perfectly with the Soul’s mission, and the Gemini Midheaven tells us that she was known for her thinking and writing–and she was an avid book and pamphlet writer, especially focused on the educational opportunities for print.

‘What she has to give the world’ (the 11th) shows Cancer on the cusp–caring, mothering, nurture–but holds three bodies in Leo, all conjunct: Pallas, Ceres, and Mars. The need for a strong ego shows here, as does the ability to act, wisely and in concert, in a sense, with Nature herself. This House describes the qualities Ms. N needed to support her mission–and the connection to both Saturn in the 7th and its rulership of the 5th suggests that she could’ve found a partner who would’ve supported her work–but she instead went the Saturn=suppression route–perhaps it felt tidier to her Virgo personality.

What was hidden in the 12th? That strength of ego, that ability to go forward in fiery pursuit of what she wanted (Leo cusp)–not to mention Black Moon Lilith in Virgo, what we deny, ignore, or what enrages us. She may have unconsciously looked away, then, from from her own accountability, while showing a seriously accountable face to the world (the Virgo Ascendant); this may suggest a case of one who addresses problems on a Collective scale (12th) while failing to handle more personal energies, especially in relationships, in need of attention. She was described as a gentle, quiet, and retiring girl and woman, except for following this singular dream to serve–and serve she did.

The Wikipedia entry on Florence Nightingale is rather good; see it here

And for Checking your own Natal Chart: a few Guidelines

Conjunctions to the Sun or Earth and to the Moon, and to Mars for men and Venus for women, may hint at easily and often donned Archetypal energies at your disposal (this doesn’t mean others aren’t available to you, it only means that those adjacent these placements are strongly a part of your identity, and so easily accessed). These are also likely highly visible to others, sometimes even when you are just ‘being yourself’; you probably vibe so strongly to the qualities of the Archetype that you see at least some of them as ‘just the way you are’.

Energies on the cusp of and posited in the 10th can also be very visible to others; these are things even those who don’t know us may observe, conclude, or assume about us, so it’s always good to be aware of what resides here. Direct contact (conjunctions) to the North Node or Vertex also carry weight. Placements conjunct the Ascendant are often mistaken for who we are in our entirety, or used as shorthand to describe character–but energies found here can be camouflage as much as they may reveal–good luck to others, sorting out the difference!