The Full Moon occurs at 5:29 AM Pacific time at 22 Aquarius 24. Venus is still closely conjoined the Sun, and so figures in to the T-square formed by Vesta in Taurus. This dynamic describes the principle tension and likely revelation (or revelatory tension!) of the Full Moon event. A Full Moon is a culmination of energy, a building to completeness of some matter either related to the House where the FM falls or that has the character of the sign in which the FM perfects, and typically this has a strong emotional component. A T-square suggests conflict reaching a head, leading to either a showdown or an impasse, a ‘no resolution’ situation that we can only see a way out of after the Lunar event, likely by, in this case, following values and commitment guidelines.

In Aquarius we could come to some emotional conclusion without even realizing it, and yet not really feel it. Aquarius is forever mixing up the mental and the emotional, and the event or atmosphere associated with this Full Moon may not be recognized as an emotional ending, though the emotions will be stirred. The mind may jump in, rationalize, or may attain a mental understanding that neglects the emotional impact (and so neglects the individual emotional needs). Distance from feelings is a distinct hazard. We may not realize ‘it’s’ over, in some way–or we may not realize that ‘it’ can’t go on like this, despite the Aquarian promise of its Fixed nature, that encourages us to believe things can go on as they are, indefinitely. 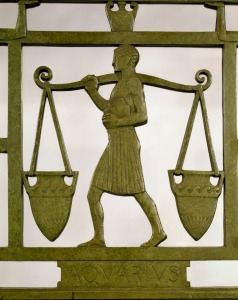 The tug-of-war this time may be between some feature of the talent or Self-worth picture, in the form of its value or cost to the Soul expression (Sun-Venus in Leo) versus an emotional-intellectual need that has a material component, or that involves surroundings or assets (Moon-Earth in Aquarius). What we spend and what we gain when we express ourselves may see direct reflection (a Moon characteristic) in material/ physical forms (Earth conjunction), and will carry an emotional charge–and the Full Moon’s function may be to make this as clear as possible by showing any dissonance among these elements of expression, material results, and the feeling nature as measured against our highest values, commitments, and those things we find sacred (Vesta).

There are no other contacts to the Full Moon that fall within our relatively narrow allowed orb. That just points out that the entire ‘punch’ is in the dissonance of the T, not scattered or watered down with many influences. You’ll likely end up running a cost/benefit analysis with values as your guideline, prompted by the Full Moon, and what you conclude may have an outsized impact on the forms Soul expression might take or the value you assign to the identity, with an emotional and material assessment of the profits possible or the costs incurred a key part of the equation.

The Sabian symbol for the Full Moon is, ‘A Big Bear Sitting Down And Waving All Its Paws’. The thing that draws your attention at the Full Moon is, as the saying goes, ‘a real bear’, that is, something truly troublesome or difficult to handle that you can no longer ignore. As a symbol, a bear suggests something big, animalistic in nature, that is already present but that you’ve been looking past, ignoring, that you’ve been denying the needs, nature, or existence of. Astrologically it may be represented by the asteroid Vesta; it may show there’s something we respect that we’ve been neglecting, or something that we need to respect, that we’ve somehow failed to honor–and certainly, what we honor is meant to show us a way out of any stress brought on by the Lunar event.

The Sabian for the Sun (and for Venus as well) is, ‘In A Circus The Bareback Rider Displays Her Dangerous Skill’. This suggests that it’s our own actions or displays of talent that create the Full Moon situation in the first place. Something daring or out of the ordinary, something we’ve attempted, is the initial source of the Full Moon event energy, and this is specifically a try at showing our skills or talents, at putting them before the audience of ‘The Big Top’–that is, showing our talents in a public venue,or showing them openly, for all to see. Look to the House holding the Sun-Venus to help you pinpoint the nature of this effort, and look to the House that holds the Full Moon for clues to the life area that offer a response to this effort, with challenges coming from, or issues pointed out, via persons or matters of the House that holds transiting Vesta (which sits at 22 Taurus 38).

Good day to . . . see what you must deal with in order to bring your unique talents to the fore and so create/ attract Love or Money. This is an ‘information’ day, one where, if you’re paying attention and ‘want to know’, you can gain an enormous amount of useful data, especially about how and where to ‘put yourself out there’.

For those born with the Sun at 23 Leo. Check your natal chart for the correct Sun degree (you may want to read both the degree number and the one that follows, if you have minutes on your Sun position–together these offer a more complete picture of your year ahead). This solar year, dear Leo, may be headlined, ‘Pursuit of Love or Money’. It may also be an emotionally stressful year, one where you feel you must ‘do or die’, or where the emotional reality meets a turning point, such that it changes dramatically. So, the pair of matters, emotions and those things pursued, are likely to swallow up most of your effort and attention, and you should know, they’re meant to–a narrowed focus may be the only way you can deal with getting what you need, with finding worthwhile reward, and with creating the relationships you really want, so don’t let others label you selfish–this year you deserve to live about you and for you. Good luck!