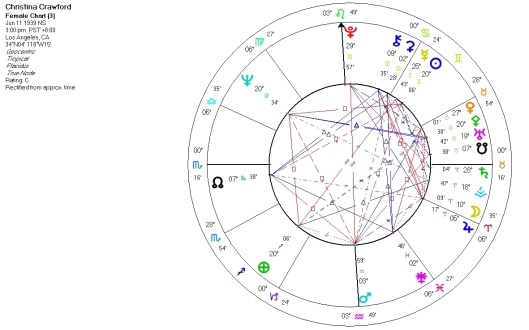 I really think there are many more maternal figures since Medea lost it who are worse than our subject; but it’s undeniable that her name has become a catchphrase for over-the-top histrionics and abuse (as well as the scourge of dry cleaners, through the admonition, “No! Wire! Hangars!”) Yes, I’m talking about the much maligned, and now nearly iconic symbol of dysfunctional mothering, actress and one-time Pepsico CEO Joan Crawford (23 March 1903, 10:00 PM, San Antonio Texas). To be fair to Joan, after a brief perusal of the mothering related factors in her chart, we’ll look at the chart of the adopted daughter who brought Joan’s alleged behavior to light, Christina Crawford (11 June 1939, 3:00 PM, Los Angeles California).

The attitude toward children in general, and one’s children in particular, is found in the 5th; for the senior Ms. Crawford, this is ruled by Neptune, alerting us immediately to the possibility that this woman does not see children in a realistic light. Neptune is in the 8th at 00 Cancer, implying that she may see children as a resource (something she was indeed accused of, in the sense of using her adopted children as props and a PR ploy), with the 00 placement in Cancer pointing up the emotional newness, even rawness, of Neptune related subjects–interesting in light of her lifelong occupation of film acting, with the 8th placement suggesting that she may have easily gained the support of others in this.

Neptune ruler, and symbol of both the mothering Joan received herself, and the attitude she carried toward mothering in general, the Moon, sits in Aquarius less than one degree from conjunction with Saturn, both in the 3rd. This is a combination for emotional repression, even coldness, as the emotions are processed intellectually; sitting in the 3rd this emphasized the mental approach to emotions, and this was communicated, whether she wanted others to see it or not. The Moon also trines Mars and Earth in Libra, marrying the emotions almost too easily to the material and to the ego and aggressive/ assertive urges, and the Moon sextiles Vesta and the Sun in Aries, making emotional challenges seem like ones that threaten her very identity, and giving the emotional scenario a label of ‘sacred’–no one may contradict her emotional interpretation! The Moon also sextiles Juno in the 1st, making her Self empowered through emotional expression. So, though the emotions are directly suppressed, we see they have plenty of real-world outlets, along with many underlying assumptions about their sacrosanct nature.

Mars, ruler of the Sun and already part of the equation through contact with the Moon, rules the 6th of duty and everyday happenings/ routine, and holds Venus in Aries, valuing the martial spirit and the kind of strict, military style routines her adoptive daughter said were a household staple. Chiron, which can often show a wound that drives much of our compulsive behavior, is isolated in Capricorn at the bottom of the chart, suggesting attempts to stave off the wound and attendant bad feelings about the Self may have taken the form of extreme discipline and repression. Chiron sits at the midpoint of a square between Juno (Self-empowerment) and Jupiter (society), implying she might have seen these two interests as in conflict, setting up a ‘Joan vs. everyone else’ dynamic.

But does she really fit the model of a ‘devouring mother’? Pluto is essential to that picture, and in Joan Crawford’s chart it is chart ruler, posited in the 8th, opposes Uranus, ruler of the 4th, and square Piscean Mercury, which brings us back to Neptune. This suggests that she may have been tempted to destroy the very people and things that supported her, that she may have been in an internal death struggle with her own expression of individuality and a longing to be part of the group, and that she was as likely to communicate destructively as she was to communicate in a way that reflected her (somewhat disconnected from reality–see Neptune’s situation) ideals. Though she certainly qualifies as responding to the devouring Archetype, she seems more a figure to be pitied than condemned; the emotional dysfunctions and woundedness that drove her were not easily dealt with, even for someone Self-aware. Ms. Crawford seems to have been unwilling, and perhaps even unable, to recognize her own distorted nature.

Adopted daughter Christina (11 June 1939, 3:00 PM, Los Angeles California) may have had her own motivations (aside from just revealing events) in writing her tell-all book, ‘Mommie Dearest.’ The view of the mother is found in the 10th, and the experience of mothering received in the state of the Moon. Leo is on the 10th cusp, with ruler Sun in the 8th in Gemini and conjunct Mercury. The Sun is sesquiquadrate Mars in Aquarius at the bottom of the chart–it just happens to conjunct Joan’s Moon. Where else would Christina’s ego and aggressive urges, intellectualtized and hidden deep inside herself, go for outlet, but to Mommie? Her Moon is in Aries (ruled by the instrument of her ego/ anger/ assertion); the Moon rules the 9th of publishing, and is square Chiron (the primal wound) in Cancer (Mom again!) and is conjunct Jupiter, which rules the intercepted 2nd, suggesting that perhaps there was a deeply hidden idea of the Self as ‘big’ and in connection to the other energies may have felt the only way to express this ‘bigness’ was through the emotions (Moon/ Jupiter conjunct).

Of course, just because someone has Jupiter connected to the 2nd, it doesn’t mean they have an inflated Self-worth; but I do remember distinctly that the book featured many episodes where Christina asserted her talents failed to be recognized. I recall wondering what talents and abilities she repeatedly referred to in the abstract, as she seemed to take for granted that the reader assumed her to be almost magically accomplished and talented, though she made virtually no direct reference to exactly what those talents were. 5th House (creativity) Jupiter happens to be, among other salient aspects, trine Pluto, implying a syndrome I’ve seen at work before (and first saw mentioned in the work of the great Grant Lewi): frustrated individuals with Jupiter/ Pluto aspects often believe they possess a whole list of imaginary attributes; the unfortunate part is that they judge themselves on these, and miss connecting with their real talents, and thus short-circuit their opportunities in reality. I believe this particular kind of magical thinking was at work in Christina. Also of note: her Aries Moon is conjunct Joan’s Sun. Reincarnationists will of course enjoy that; I’ll just say that this speaks of the child’s emotional state (and needs) meeting the ego/ identity/ Soul of the mother, head on; could it have felt to both like there was competition for recognition of each of these needs/ energies in the other? Even looking at only the couple of contacts between these two charts we’ve mentioned (Mars/ Moon, Moon/ Sun), we can see that, no matter how Christina was treated, she likely would have seen Joan as trying to outshine her, and perhaps, in disowning her own aggression, Christina more than a little contributed to the situation that came about; even children have the full pallet of urges and attributes–when we forget that, we infantilize (and fail to respect) them, and put our ability to have a fulfilling relationship with them in peril.