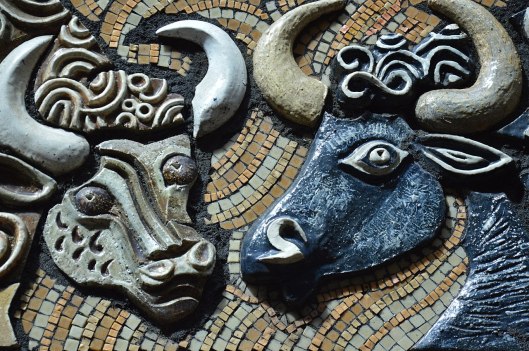 By the 28th of April Uranus enters that tense 29th degree of Aries, and remains poised to stir up panic until its entry into Taurus on May 15th. What fears might this stir? Being alone, being abandoned, having to lead (if we’re more comfortable anonymous in the crowd) or having to follow (if we feel we must lead), as well as various cautions around what to do, what to choose, how to act, and whether asserting oneself is a good idea, and with that latter I can say, it may not be a good idea, but it may be one we feel compelled to do! Sort out what and who you’re really mad at (there are at least a few objects of outrage, if you’ll only admit it), for best (and least destructive) results.

Also of note today is the Mars-Pluto conjunction in Capricorn, a no-frills kind of wallop that will appear in some form as two angry, vengeful, insisting-on-change, or bent-on-destruction parties meeting head-on, with one insisting on forward progress of a Cappy nature and one determined to roll back the clock or go down in flames trying. Ugh, avoid this smoldering train wreck if at all possible by keeping the focus on manifesting your ideal and most Self-reliant Self (Juno in 29 tense degrees of Pisces). You have the mandate to be your best, now go be it without being distracted by the wreckage nearby.

Right around November 7th Uranus is in apparent retrograde and returns to that  final degree of Aries, for old times’ sake, I suppose–why else would we fling ourselves back into such a stressful position? We also see at that point that Uranus forms a massively tense T-square with the transiting Nodal axis and will stand quincunx Jupiter in Scorpio. And in just a few days this is followed by an opposition from Ceres and a sextile from Mars in Aquarius. To me this looks like the most incendiary point for Uranian upset, making the current conditions look quaintly tame in comparison. In contrast to the present single, easily-controlled-by-us fear we may wrestle with, November offers a do-or-die scenario where some of us may indeed choose the wrong option–we’re worried about the future, maybe fearing it won’t come!–likely out of fear of death, fear of obliteration in a more mundane sense, an insistence on vengeance or ‘teaching x a lesson’, or out of a deep, dark desire for more than our fair share (Jupiter in Scorpio). Not all of us will succumb, but we’ll certainly all be tempted, and the results will be a real-world check on the limits of our power (the opp from Ceres) and a more reasoned line of thinking, possibly arriving too late, to guide our actions (Mars in Aquarius).

Issues may linger (causing, among other things, a final push to do what’s right or resolve things, especially hurts–Chiron semi-sextile–as Mars passes conjoined Uranus mid-February 2019) until Uranus finally lets go of Arian concerns, around 6 March 2019. So, we’ll likely re-visit all this in a hopped up form late next winter-early next spring; once Uranus enters Taurus, get to know the ‘new’ way the planet will work in the sign, and be prepared for impact if you have early degree natal placements (especially if that placement is Mercury, which influence from Uranus may cause surprising things to shoot out of your mouth until you steady the impulse).

If you haven’t visited lately, you should: Jude Cowell’s Stars Over Washington is jam-packed with illuminating articles, mostly of a political or US history bent. Check it out!

My Daily Astrology Diary, The Astro Essence, Uranus at the Aries Point, Uranus into Aries

Thinking of our friends in Japan with tonight's massive earthquake C. Bartlett 1916 {{PD}}

We’ve already had a taste of this starting in late May of last year; now, Uranus enters Aries on March 11th at 4:50 PM Pacific. It makes two aspects, a sextile to Pallas at 00 Aquarius and a sesquiquadrate to Saturn in Libra, and both should inform Uranus’ Aries Point manifestation. If the Aries Point is a major point of inception, where the pure, Archetypal Uranus energies move from concept into reality, then perhaps we should be comparing our own Uranus energies as they manifest as both concepts and realities. I know that’s a tall order of Archetypal thinking when we’d all really just like to pull up a chair on the verandah and sip a mint julep and listen to the crickets as evening falls, but it will only be to our benefit if we can recognize at least some of the potentials for Uranus’ material presence–and these will certainly be keyed to his natal presence in our charts–otherwise, he’d show up in the same guise for everyone.

A few loose guidelines: if the Aries Point (00 Aries) in your natal chart is below the horizon (the axis of the Ascendant/ Descendant), then Uranus will likely appear as a concept first, and/ or as an internal perception or awareness–an idea will be the thing ‘born’; if the Aries Point in your natal chart is above the horizon, then you will likely see materialize or be presented with a Uranian manifestation in very concrete terms, and probably very suddenly. Remember, the passage of Uranus into Aries is a ‘birth point’ of sorts, with all the blood, mess, squalling, sudden emergencies, and tender feelings entailed in any birth very likely to appear to some extent.

To see the entire report, the forecast, the articles, and to receive EXTRAs! and have access to the protected page here, subscribe anytime with the ‘Add to Cart’ button at right–Only $15 for three full months–Thank You!

As Jasmine has kindly pointed out in the comments for the 10th, it’s definitely worth checking Theodore White’s Global Astrology for enlightenment on current events.

As Uranus passed through Pisces, we spent a lot of time concentrating on how the individuality could serve the Collective; in fact, it became heresy to put too much emphasis on the Self. Statements of ‘I want’ were politically correct only when a want for the larger picture was included as well: “I want to be the next Lady Gaga, and cure world hunger, too!” Nothing wrong with that, just that we all began to sound like we were in the running for Miss America, with a lot of pressure to allow a sincere wish to help be almost our only public display of desire. At this time I’d like to blame it on Uranus in Pisces, naturally making the group/ Collective loom large in our consciousness. Higher Mind (Uranus) made us extremely aware of our interconnectedness (Pisces), and this was absolutely a positive evolutionary step–so what’s the next step, as Uranus enters Aries, the theoretical ‘beginning’ of the zodiac–and of course, hits the Aries Point, which has taken on almost mythical significance as a point of  extreme effect?

While Uranus was in Pisces, big goals and big canvasses were the style–we couldn’t just donate school supplies to the local elementary school, we had to gather money and supplies city-wide, then box them up and send them to Afghanistan–again, nothing wrong with this at all, but it’s precisely this kind of response to need, the kind and quality of innovation and progressive thought in solving problems, that I think will undergo a blanket change. With Uranus in Aries, the likely response may be that individual efforts will express a one-pointed group Will, and the effect will be that everyone must identify by their group and then assert their desires.

At first glance this seems terrible; the last thing we need is segregation by interests, financial status, nationality, or any of the other ugly ‘have and have not, are and are not’ strategies that have been employed in the past (and that are currently being peddled once again by Tea Partiers, among others). Yes, there is this regressive version of Self-motivated Uranian energy that will pop up–not everyone will lift themselves out of the mud, unfortunately–but I think the evolved version will actually be quite productive, introducing the idea of the citizen-soldier with the ability to lead the group as the identity of each member, not just as the identity of one or two.

This also might incorporate the idea of banding together without the kind of exclusivity that was popular during Uranus through Capricorn, where we judged judged judged other groups and drew strict boundaries according to some hardline Capricorn values. After the immense widening of our idea of the Collective of which we are a part and to and for which we are responsible in Uranus through Pisces, we come to this new stance as strong individuals who have forged our identity and can now act for and with the group without the need to close the clubhouse doors to keep out the riff-raff. Instead we are equipped to see to causes and forward the group agenda with the consciousness of Pisces as a backdrop, so that the individual Will works in tandem with the best interests of the whole–and the group identity simply becomes a loose affiliation of those with common interests who are equipped to aid each other, rather than a tight-knit circle that can’t see beyond their own noses.

Well, that’s what I think.

There’s more on Uranus into Aries here http://dogandsunflower.wordpress.com/new-eclipse-spring-2010/ along with material on Chiron into Pisces, Ceres as a major energy and possible health indicator, the Sun/ Earth axis, Soul Purpose, and the material reality needed for development, couples synastry, a bonus article, the Forecasts for May, June, and July, and more!  Comes with a free mini-reading on Ceres in your natal chart, prepared by me.

Today’s Link: Tony Vowles on the meaning of Gemini http://www.theastrologyblog.com/2010/05/sun-in-gemini.html