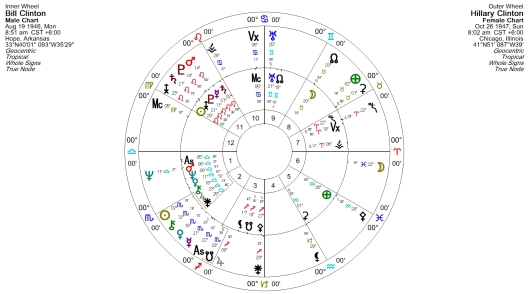 Here’s a reprint from 2008, for the curious and the bemused, on this lazy Sunday:

Sometimes the attraction between partners is lost to onlookers. No other modern couple has caused the puzzled scrutiny and armchair analysis of their relationship more than Hillary Rodham and Bill Clinton; now I’ll add my astrological take on the ‘whys’ of their relationship, using techniques featured in my book, THE ASTROLOGY OF INTIMATE RELATIONSHIP. There’s just not room here to do an exhaustive dissection of the relationship astrologically, but in any case I find that’s rarely needed; not to shortchange any relationship on its complex nature, but the interaction between two individuals can typically be outlined fairly with a few strokes, and there are always a small handful of contacts that describe the relationship’s essence, and thus satisfy our goal without getting lost in minutiae. Conjunctions often spell out the core of the interaction, and in significant relationships there’s usually no shortage of these.

In many ways, the ‘star’ of this relationship in terms of attraction is the meeting of his 1st House Venus to her 12th House Neptune.  Venus in a man’s chart shows his ‘ideal partner,’ and in Bill’s case this is someone who probably literally embodies his anima (1st House placement); posited in Libra, his desire is for someone gracious, partnership oriented, and lovely as seen through his eyes, and conjoined Hillary’s Neptune, this may be precisely what he sees. In what’s likely a combination of projection of his Venus and the naturally obscuring and inspiring qualities imparted by contact with another’s Neptune, Bill may be genuinely confused by the polarized reactions others have to his wife. In the other direction, she may find his anima expresses certain more Universal qualities for her; he may carry to some extent her more empathetic qualities. He feels (and perhaps expresses) her pain, as well as that of the Collective.

Her Sun at 2 Scorpio is widely conjoined his Libra Juno, again referencing the strength of the Venus connection, as he will see Libran energy as ‘wifely.’ With this contact her very Soul essence expresses not just this ‘wifely’ role to him, but the power of the Scorpio placement is supported by him; he expects her to show a strong, empowered Self. What’s more, her Juno at 29 Sag (and we know what those 29 degree placements mean–they must express!) is conjunct his Pallas–he sees her as highly empowered and his own role as lending wisdom and skill to this.

His Earth conjoins her Pallas, suggesting that he grounds and supports materially the expression of her innate wisdom and skills. His Ceres squares her Sun, likely allowing her to carry his anima authority figure (though not without some conflict between them)–he may feel she’s something of a force of nature! And her Fire Jupiter fills in a Fire Grand Trine cross-chart with his Saturn and Vesta, painting a dynamic picture of real-world service to the social sphere as important to them both.

Bill’s Sun falls in Hillary’s 10th, conjoined her Zeus and Saturn–not the most romantic of placements, but she may feel she has a true supporter in him, and that her ambitions can be fulfilled through him, while her Sun falls in his 2nd–considering some of the already discussed contacts, he may identify with her, especially with her talents, very strongly–something that would probably surprise a great many people.

His Sun is conjoined her Saturn, a bit of a danger position. Even though strong, direct Saturn contacts in both directions (each person’s Saturn contacting something of the other person’s) are necessary for a relationship to be both lasting and serious, this is one of the tougher interactions, as she will spontaneously, and almost in spite of conscious feeling desire to repress his very essence (the Sun). He will sense this, and, considering the other contacts, will both remain in the relationship and seek to avoid her control at every turn; with his Saturn square her Sun, however, he may do the same to her, but more obliquely (square) likely through methods of open conflict.

Finally, we should backtrack a bit and look at general partner preferences for each. We’ve talked about Bill’s Venus, but what about Hillary’s? It sits in Scorpio; ‘ideal Hillary’ would have all the sexy, mysterious, stinging Scorpio attributes. Her ideal partner would have Leonine qualities, as shown by her Mars in Leo, and Bill has five placements there, including the Sun. As to his ideal view of himself, his Mars is in Libra, again aiming for partner-oriented, gracious, and sharing qualities with an aesthetic bent, just like his ideal woman.

We could go on with many more features, but I’ll close with this: her Ascendant squares his Sun-Zeus. This suggests that her personality rubs him the wrong way, at least in terms of what he believes will fulfill his Soul intent, ambitions, and desires; but her Midheaven, Saturn, and Zeus are widely conjoined that Sun-Zeus, suggesting her public persona, her sense of restraint and stability, and her ambitions complement his and help fulfill his wants. His Midheaven to her Vertex only reinforces the ‘destined’ feeling. No interaction is without its negatives, but when the aspirations of each individual connect so cleanly, they can remain together in spite of events that would break others apart.