Try as we might, we can’t see a clear path into the future. What to do is obscured by our own wants and ambitions, and though we can identify both what’s practical and what’s wise, it’s not helping. It feels like we’re thinking clearly, but the reality is that the mental faculties are caught at the liminal point of turnaround, mired in a kind of retrograde energy that makes accurate perception difficult as peering into a dark cave–are those shadows, someone moving deep within, distortions of the light, beasts, or are our eyes playing tricks from concentrating so hard? Note impulses, the desire to move in a particular direction, note what you want and what you see as smart–and then wait a few days (again, past the Merc direction and the New Moon) to choose among those alternatives and then move forward. 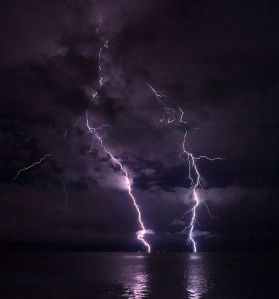 By Ian Boggs from Astoria, US – Lightning on the Columbia River, CC BY-SA 2.0, https://commons.wikimedia.org/w/index.php?curid=3353472

Today’s word image is lightning striking twice in the same place. There’s a saying that claims that doesn’t happen, but it does. What big event, amazing occurrence, fortuitous serendipity, fated meeting, or once-in-a-lifetime opportunity happened to you before? Well, get ready, because in some form, something special will present itself to you again–maybe exactly the same, a second chance, or maybe something quite different but rare, an unusual, twice-in-a-lifetime occurrence. Try to recognize it for its scarcity, and how you won’t get another chance like this again, so if it’s something you wish to do, go forward without hesitation, and without fear.